Sometimes setting off on a long journey feels a lot more like leaving then starting, the anxieties build far more than any other point in the experience. Leaving Rio was the toughest yet. I said goodbye to Anne the day before, a broken car and distant job means she must spent the night at a friends, it made for a anticlimactic send off but helped spread the nerves. I had naively grown very comfortable with Rio life but needed to keep moving, brave Anne shared her home me for what has been a treasured chapter, but living together requires some space and it was time to see more of Brazil.

BR-101 is the old road that runs down from Natal in the north, past Rio and São Paulo to the Uruguay border hugging the ragged green coast. Mostly smooth with a generous hard shoulder it makes for good cycling. Some Brazilians have called it dangerous for its traffic and winding ways but has been a blast on the bike. The first day felt great to be back out on the bike but my ambitious touring brain had forgotten my five months rested condition, by 60 km things got very slow. Urban Rio slowly thinned through poorer neighborhoods with friendly smiles. On what is mostly a jungle lined road I stop at a strange site; an abandoned Christmas them park, giant gaping concrete Santas and candy canes stand among the palm trees. Regular waterfalls cool the hot miles. By 100 km it really hurts and the friendly hostel comes just in time.
I stay three nights while I walk a beach, work and arrange to fix my laptop which then decides to fix itself. Mysterious little bugger.

The boatman looks a little confused at the bike, not much call for one on a roadless island but we skim over the blue on the speedboat. Once a prison for communists then a paradise hideout for a drug lord, it’s now a tourist highlight and hippy haven, offering postcard beaches and healing with yoga or booze.

The campsite is a bit basic and with my hammock effectively slung in the entrance sleep is for another time. The island dose however grant me a great trail up to the Pico do Papagaio – a parrot beak of granite sticking out the ridge like a perfect pirate film lair. It’s 6hr there-and-back with a roar of monkeys in the distant canopies, buzz of hummingbirds and a mist swirling summit.

All that hiking and huffing deserves an X-tudo; hamburger with cheese, bacon, tomato, ham, crisps and an egg (salmonella probable). Oh yeah, they are pure glutton gold and I plan on eating as many as possible.
Another slightly confused boat bangs over to Angra dos Reis where I’m the only guest in the Lions hostel.
The landscape of Brazil here is dense, steep and populated which makes for bad camping opportunities. So much so that it receives a rather different image in the national mindset which is a shame, however with cheap hostels along this more tourist route camping is best saved for another day.

Oh hay there! Waves Jim. Broad smile, broad chest from a little cafe on the road to Paraty. He’s doing a similar trip so we roll on chatting away the miles, hard shoulder clear enough for two side by side to forget about the traffic. Now in his early sixties he’s in formidable shape. A retired fire captain from Edmonton Canada, he’s pedalled most winters for some decades, stamping off many of the worlds countries with is bike. It’s always better to share the road and better yet with a veteran of the game. After living with someone for three months my own company felt strange, Anne and I talk when we can but I miss her hugely, Jim’s company was well timed.

Paraty offers some the first history I’ve seen in Brazil, the colourful old colonial buildings are half missed as everyone is starting at there feet to navigate the bolder sized cobbled streets. We take a days rest, meet some nice folk and I get some work done. Such a crap tourist, shame on me.

Miles of huge green coastal vistas fly past again to Ubatuba, a hot but an easy 80km. Jim finds a hotel while I meet Henrique, a warmshowers host at his place of work: Project TAMAR Ubatuba, a turtle sanctuary. The facility helps educate people and provide research and care for the gracious creatures. There are four species here but its mainly the Green Turtles witch they focus on as it get into difficulty with the local fisherman nets. Fishermen bring in accidentally caught turtles (at great risk to themselves) but are starting to work with Henrique to prevent the captures. Many are also brought in with a rampant form of cancer around their necks which has only recently become an issue but is causing as much as 60% of turtle deaths in Hawaii, there may be a link to plastics. One learning with great results pioneered by the project has been to demonstrate to the fishermen that setting the nets over-nigh rather than in the day not only yields much more fish but crucially far less turtles in the nets. It’s exciting progress, which is taking Henrique to Lima for symposium but his English is a problem so we talk keenly into the night to practice.

The coast road sweeps past numerous islands on the left and impenetrable forest to the right. A thousand green tones blanket the dramatic hills with firework like explosions of purple from the Tibouchina Granulosa trees. I find Jim again on the road to Ilhabela where I then cross on the boat to meet another host Pedro. He and his wife Isabella run a top rated valley of guesthouse Na Mata Suits on the tranquil island. A real treat for a smelly rider. He is a passionate cyclist and frame builder and helps passing riders. He promptly asks of my planned rout, “Santos I think”, “Don’t ride through Santos!” A flurry of Facebook invites and messages and I’m soon very grateful for his inquiry and help. Santos and Praia Grande are sadly where foreign cyclists often get held at gunpoint, even he is nervous to drive there. A local rider Luis often offers to ride with people but this weekend it’s local race day so all riders are busy testing each other. I talk to a few more folk and the unanimous feedback is to get a bus around the area, a shame to dismount based on fear but we’re not missing much.

We talk bikes late into the night over pizza, he had recently traveled to Frome in Somerset to learn his craft and got hooked on cider. My random looking gift of beers turned out to be a bit of a laughing point, Isabela joked it’s what they drink on the farm in the state of Bahia when the power goes out. To replicate taste: burn red wine and mix with sambuca. A small glass each is more than enough to finish the night off.

We chat late over the hearty breakfast and by the time the ferry gets me to the mainland is 11:30, perfect timing to meet the big hills at high sun. The climbing batters me, near the top an equally slow lorry gives me a thumbs up and I grab on the back to be pull up the last of the gradient. Glorious cheating and honks of support form those behind.

A heavy black column of sky soaks everything, the flat road is and inch deep with water and breathing is strangely hard for being on land. Spray from the car tires is bizarrely warm thanks to the baking black surface. It’s revitalizing after what was by far the hardest day yet. I find Jim at at beach bar, both of us look a little stunned by the days challenge and drink to its ending.

Leticia popped up during my Santos scoping chats and welcomes us to her guest room in Bertioga, she treats the two of us to a big meal with the family while I try my Portuguese with the many cats they keep, though not much luck so I chat best I can with the family.

Morning inspection reveals my rear bag rack is broken, snapped near the frame, not great news but we keep moving.
Leticia rides with us down beach to Bertioga bus station and waves us goodbye, a true saint. Both Jim and I dislike watching the world pass behind glass but the bus shows even the rout around would have been a day of wretched motorway riding. Our change over in Santos is perfectly timed and we are soon in Itanhaem for an afternoon of life admin. I find a bike shop which dose a good fix with pipe clips to the rack and Jim finds a beach bar.

I stumble upon a hostel just as the family who run it are digging into dinner, I’m immediately welcomed to the table and mountainous plate put in-front of me, it kind of feels like cheating after a bus day but who can resist Brazilian cuisine. Turns out I was their first foreign guest.

Sunday in Brazil is a slow day with very little open, I find petrol to test my still unused stove I picked up in Istanbul and enjoy a rest. In the night it rained, it rained a lot, with the usual Brazilian ferocity but this time with endurance of British drizzles, the result was Veniceian streets perfectly flooded a foot deep, strangely tranquil.

Monday morning tasks are to get my phone working again and bike rack welded. Turns out phone networks take the weekend off here, fair enough. My old aluminium rack has always been a potential issue, most riders go with steel as it’s a stronger more repairable choice, Arc welders for aluminium are rare beasts. Hospitable hostel owner Alan asked around a few friends and I was soon recommended to try a furniture maker across town.
The hanger like workshop was a beautiful sight as was the welcoming smile of craftsman happy to apply his skills. In five minutes the bike was upside-down, tools armed and sparks flying. We very nearly blast hundreds of volts to the frame with my petrol bottle attached, not good, my bad, no explosions. Metal flowed and the rack was one again, I skip with joy around the shed, this could have been a real kicker for the trip.
I give him a hug and curse myself for forgetting his name, despite my efforts he only take thirty R$ (£5) for his time and he waves me off into the fresh rain, I couldn’t be happier.

A quick afternoon ride to sleepy Peruibe, where Jim and I pass the night with monster burgers and a few beers. The next day he will follow the road inland to Curitiba while I will head for the coats, so a few extra beers are drank with a “Saude” to the roads ahead. I leave early to start a big day of 116km to Igaupe, it finally feels like things are settling down, maybe its the first proper mountain views or the waterfalls but Brazil is starting to open up to the bike and its a joy. 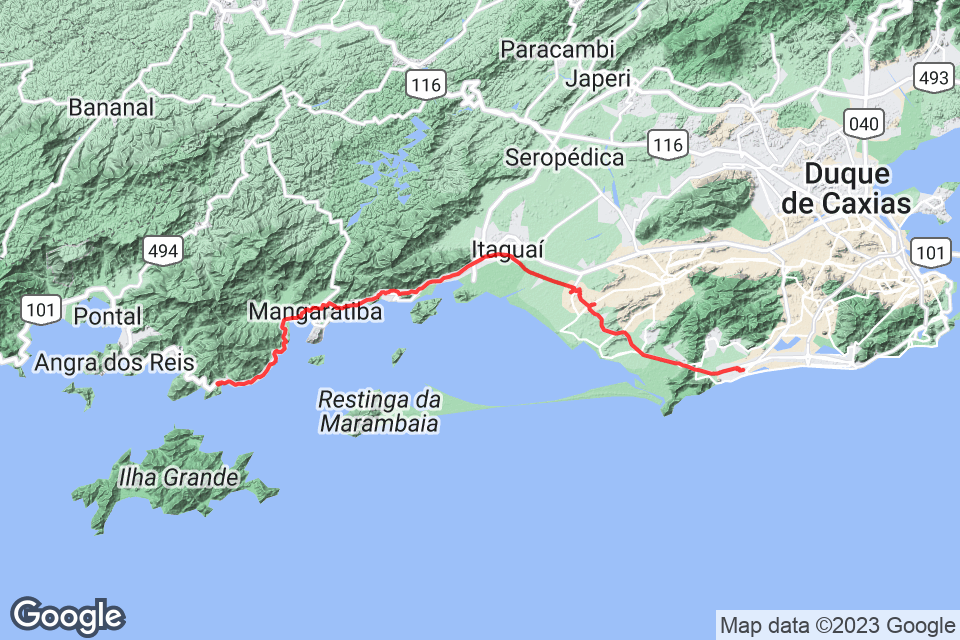 Following the Costa Verde on the BR-101 out of Rio 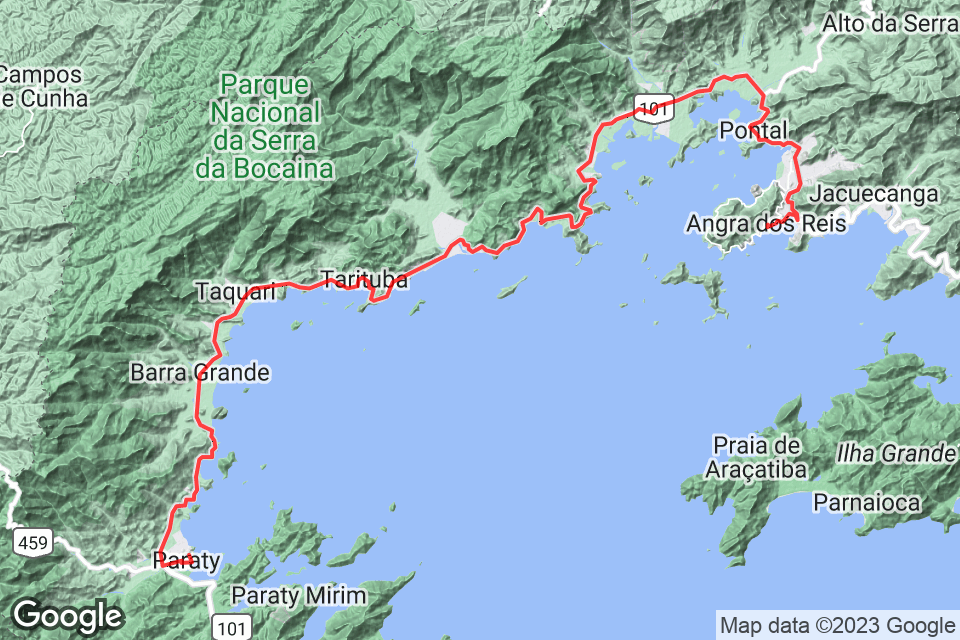 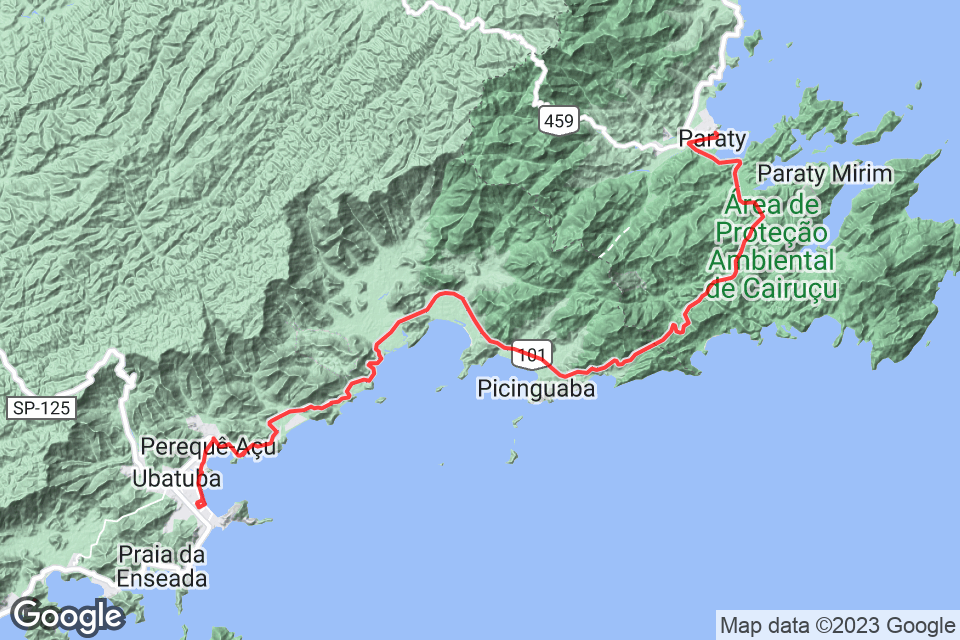 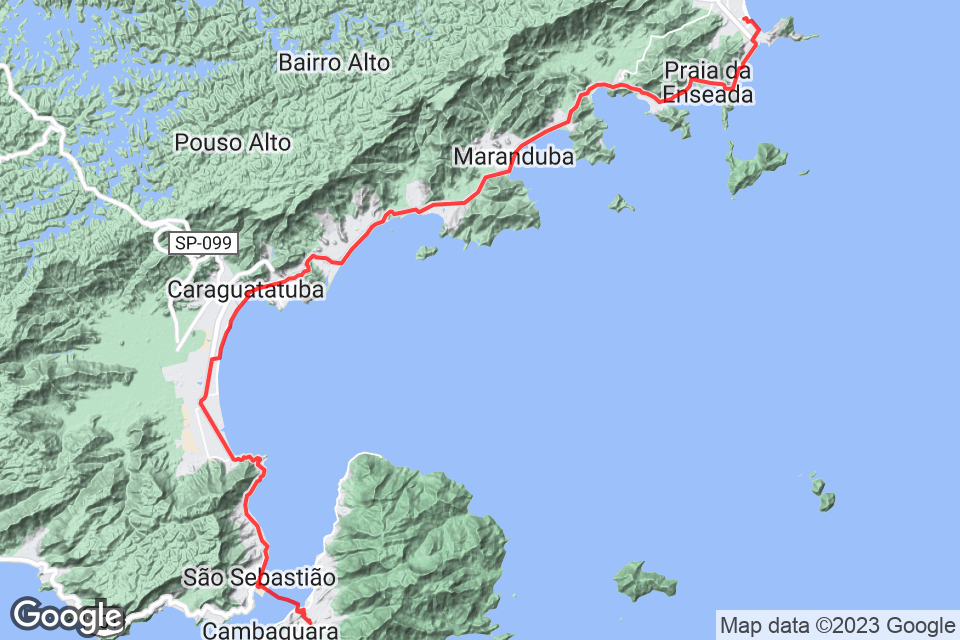 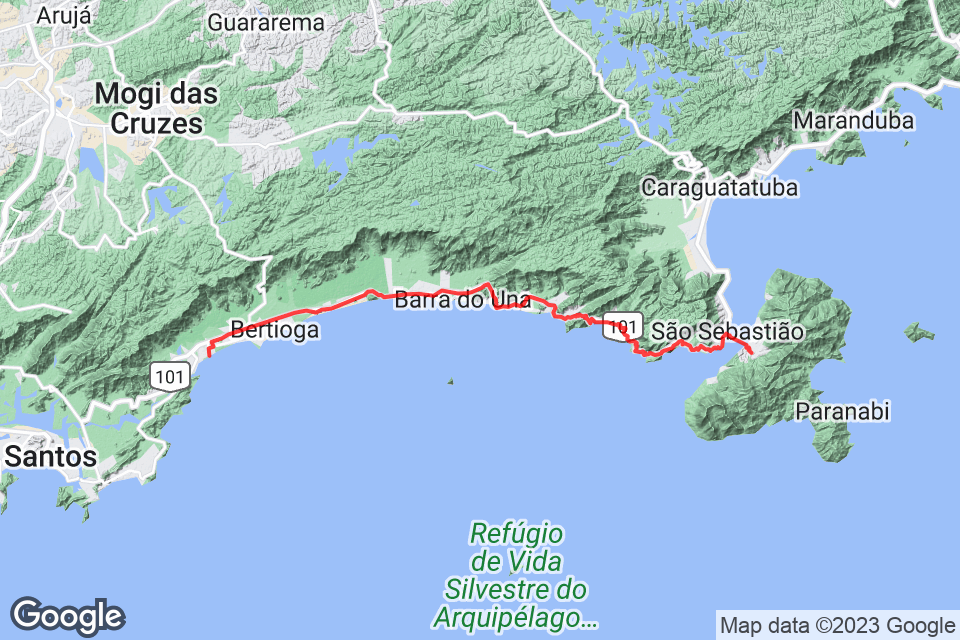 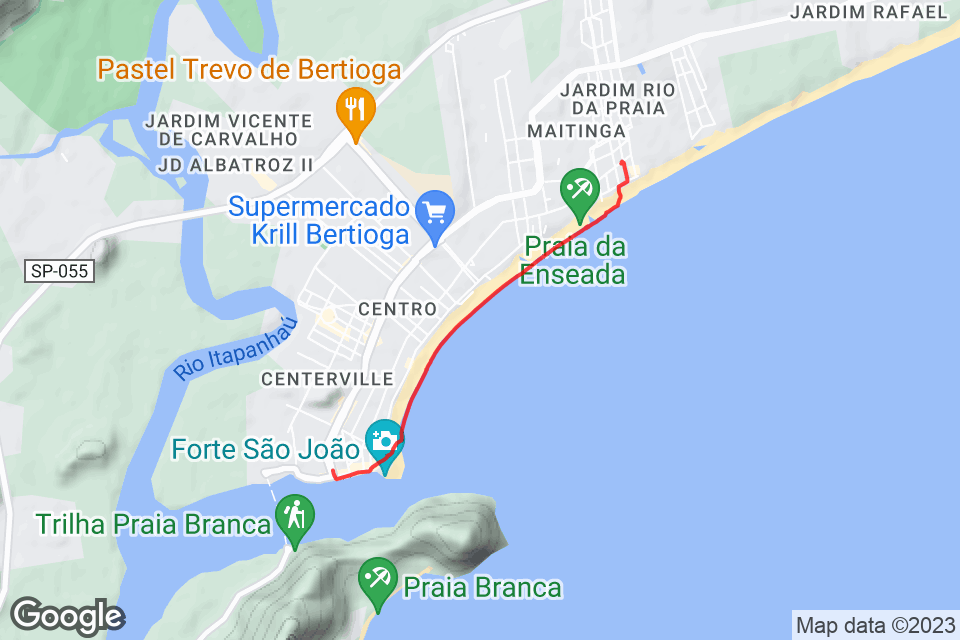 WARNING: Riding through Santos and Praia Grande is dangerous for foreign cyclists so we took the bus around. Some local cyclists were really helpful and normally offer to ride with you but were all at a local race. 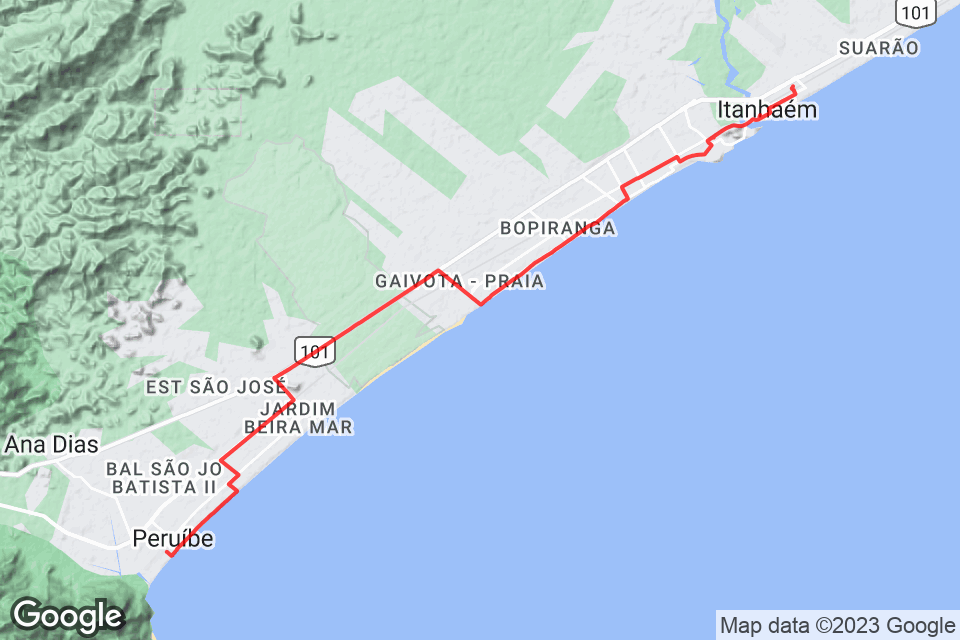 Short day as has to find a welder to fix my aluminium rack. 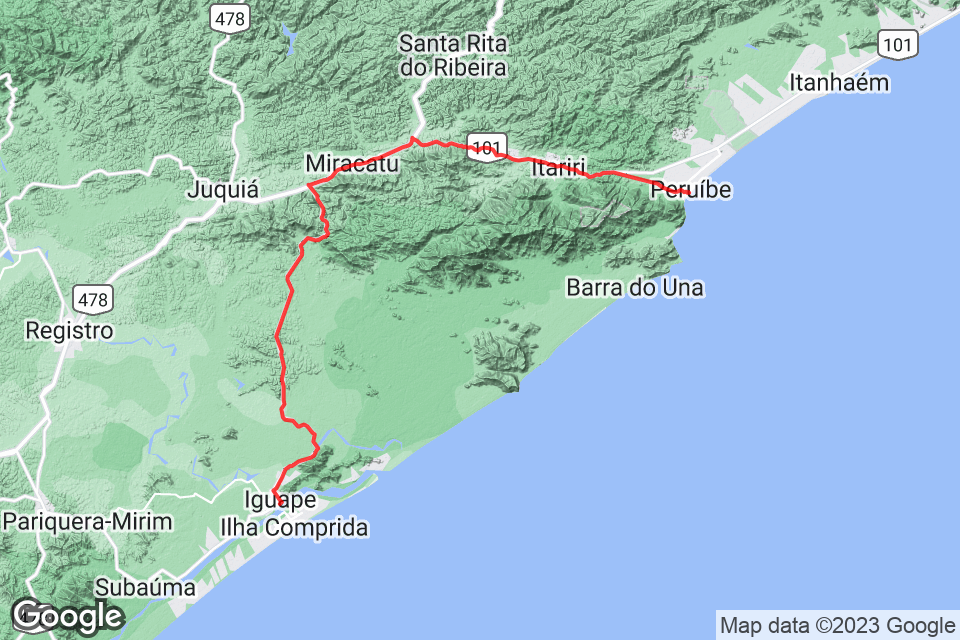