The days at the Vila Victorija have settled together to form a homely new routine, one which I’m struggling to imagine has an end.

Afternoon swims have become more comfortable, the distance stretching a little further each time, so with a day off I decided to see how far I could splash. Packing a towel, phone, money, light jacket and trail mix into a roll-top dry bag I stepped into the mill pond calm lake and set off towards the town. Sticking to the lakes perimeter meant a new ducks eye view of the shore side houses and woods, while providing peace of mind that whenever one felt tired you were never far from the path home. Slung over the shoulder with straps from the panniers the bag bobbed along behind. I got a brief brake helping a girl retrieve her sunglasses from the bottom of the lake but otherwise slowly flapped round, switching strokes, not stopping. At roughly halfway round the lake I had already gone further than I had hoped so took to land for coffee, grateful for the warm jacket in the bag despite the hot sun. Spurred on by caffeine and sugar I dived back in passing rowers, beach bathers, fishermen and chatty chains of ducklings. As the aches and fatigue set in backstroke became the stroke of solace. Flat on my back staring up wondering if it was time call it quits, however the clear skies offered a rare gem; a halo with sun dogs; a miracle of refraction and atmospheric crystals forming a perfect ring around the afternoon sun – which I took as encouragement. Soon the point of embarkation came round, one last sprint and I dragged myself out and up the bank violently gasping and shaking with a crazed grin on my face, a 5.8km lap of lake Bled – Done. 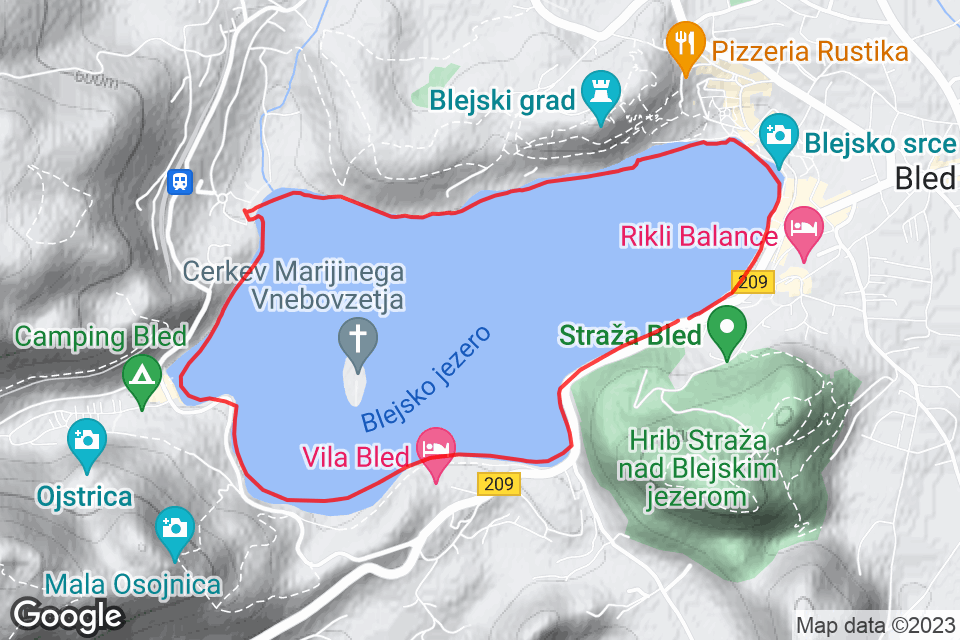 Decided to try swimming, left me feeling broken but so happy to have made it all the way round

Evenings at the hostel are always varied; heavy rain put an end to the BBQ plans so Anne stepped up, shearing her caipirinha skills to great effect.

Took an afternoon out to explore some if hills to the west of lake Bled, following quiet forest paths and logging roads. Somewhat absorbed in a podcast I ended up doubling the intended walk but it doesn’t really count as lost when its so beautiful and calming. On the way home I thought I’d try following a small path on the map to a popular viewpoint over the lake, seemingly simple but sadly not in reality. The path was more a divergent set of old trails which lead me into a section of cliffs, the sun baked limestone loose and crumbly, the ground tick with dead leaves, sluffs of rock and detritus would slide down the hillside to the valley below with each step and small trees provided the only hand holds. Slowly I realized I was in a bad situation and unable to work out where I had come from, feeling vary exposed as I scrambled from hold to hold a sense of urgency replaced the wandering spirit. I noted my GPS coordinates in a text message and double checked all my options. It took me and hour and a half to shuffle along to a point where I could see the path again below me, where the only way to descend was to bend a young tree and us it as a rope to rappel down twenty feet of cliff. The remainder of the walk home was full of swearing and promises from my serious self to my wandering self to never follow old paths like that again.

The river Soča cuts a mythical blue trough the Julian Alps, gorges so deep the water barely sees the sun and as such you can develop headaches in your feet if you wade into the cold torrents.

Luka generously offered Anne and I a tour, so after a morning of hovering up the spider population of the hostel we jumped in the car; metal blazing, to roam the Soča valley. The route is roughly a 200 km loop around the Triglav national park, first stop the Vršič Pass; the old serpentine road climbs round cobble stone corners to 1611 m then drops us in the Soča valley. The source of the river is a rumbling cascade which appears straight out the side of the mountain, a path with cable lets you walk right up to the geological faucet. We follow the river as it grows, down to deeply sculpted gorges where the azure torrent works its magic.

Next a bit of history. The valley formed a major battle line against the Italians and the slopes are littered with bunkers and trenches carved into the rock. Trdnjava Fort near Bovec has been an important site since Roman times, the current incarnation a solid lump between cliff and gorge. A tunnel leads up the cliff to the old hilltop sister fort which artillery reduce to dust.

Another stop and we scramble up another Soča feeding river as close as we can get to a massive waterfall below Monte Guarda.

Passing trough Tolmin on out rout home, a sign for local cheese caught our eye. We shuffle through a typically cluttered garage to the cheese room out back. Smooth creamy tasters are passed round and wine poured from the steel vat. We leave with half a wheel and a gallon of sharp but sweet white wine, all for about €15. It didn’t last long against our appetites once home with a quick BBQ among friends.