Talking over a beer with Sasa we had hatched a plan to hike some time, but things got interesting when she proposed combining a hike up and paragliding down; the dream of flight. Her boyfriend Jaka is a tandem pilot, so I could be strapped to his chest and leap as one, local peak Stol would be our proposed takeoff requiring a hike with the 20 kg wing and equipment on our backs to the 2236 m summit. Sadly Jaka got some last-minute work and the plan folded, probably best as I think the weight of the wing would have crushed me before we reached the top. Instead, Sasa and I enjoyed a leisurely walk up to the Oglar view-point for breakfast and a view to kick-start the day.

That afternoon Anja, Polona and I donned the hiking boots again, roaming around the lake, stopping off at Josip Tito’s holiday residence overlooking the lake. He spent a lot of time in Slovenia entertaining the worlds various dignitaries and hunting in the hills. His main house now holds the towns prestigious Hotel Bled and his old meeting room sits high above the trees transformed into a café. Mosaics decorate the walls with scenes of the hard-working masses, the soviet presence strong. Grounds below are overgrown, the old walkways wind across the hillside leading to mysterious abandoned building providing little clues to their original use, so we fill in the gaps with imagination; Gladiator stables and swimming pools for dogs, not the best historians. Jumping the fence back to the lake path we carried on round and up to the Velika Osojnica, a small hill with a lookout across the lake which features on half the postcards; we snapped our own sweaty versions and toast the lake.

Woke to early morning yoga which helps the bike knackered spine a bit. Paraglider Jaka had blagged Anja the assistant manager and I on to one of the morning flight slots with the tour company where he works, so excitedly we bundled into the car and set off for local peak Dobrča. The small car bumped up the long steep gravel track hauling 5 bodies and all the kit up to the takeoff site. We hiked the last 500 m, giving me a change to carry the 20 kg wing on my back and say a prayer for the plucky car. We dressed up, tested kit, set flight computers bleep mode and GoPros to shoot then waited. It was a clam day, the skies clear, but sadly too calm. We waited 30 minutes but there was simply no wind and therefore no means to launch safely. The car was recalled from the landing site back up and we methodically repacked the kit. Paragliding is very much a zen sport, some days you sit, watch and fly, other days you just sit and watch. Unlike those adrenaline junkie skydivers who just fall out of  a plane, paragliding requires a deep understanding of nature within which your running off a cliff into, some days its simply not you day.

Old drinking friend and killer tattooist Rae Pinx passed away suddenly in Berlin. Gutting news, she was an indestructible soul, vibrant character and pro level bar fly at the Fitzherberts. I took a long walk to get some space to remember her. All thought are with her mother and Marc.

The hostel plays host to various local events; this week a local art school. We spent the afternoon filling the walls of the stairwell, hanging 50 or so canvases and sketches. After  a round of wine the head of school talked us through the various students and their works. Staggeringly most students were between 8 and 13 years old, some already experimenting with advanced abstract forms and methods.

Another blag form one of the touring companies I jumped in a van with Mario for an afternoon of canyoning; Sliding, jumping, rappelling and zip-lining down small steep rivers. We streached and danced our ways into thick wet suits and walked up through the woods like lost surfers to the first jump point, a 5 m leap into a small freezing pool. For the next hour five Irish girls and I slid and swam our way down the plunge pools and rapids of the fast flowing stream, zip lined across the valley and repelled under a waterfall. Filling the hills with screams of cold water shock, vertigo and joy.

As of arriving the poor bike has remained in the shed so seemed fair to explore the hills of Pokljuka by the trusty steed. With fresh legs and no bags the bike flew along, even devouring a stretch of 18% climbing. The long serpentine road leads up to a plateau of forests popular for biathlon, the only company on the road were wheeled Nordic skiers, a strange site on the summer roads. At the top a maze of tracks provides all year loops among the trees and a shooting range pinged with rifle fire. The steep decent to Srednja Vas near Bohinj rattled along gravel roads at high-speed, for 20 minutes without pedaling, hands barely able to hold the bars and a happy beard full of dust. Racing back towards Bled I pulled over to fix my first puncture of the trip, pretty good for over 2000 km. 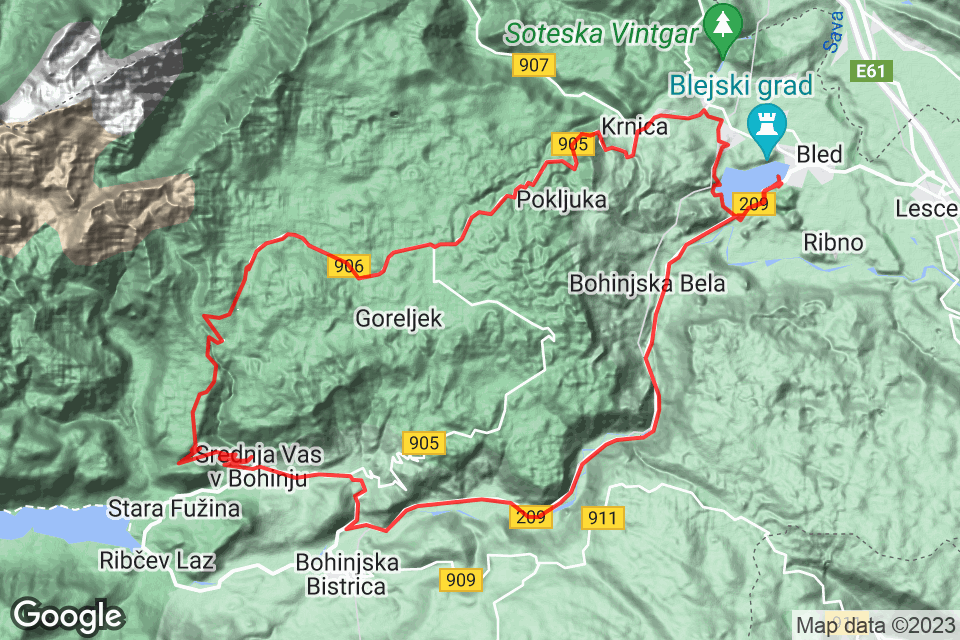 Any visit to Bled should include a row to the island so Anne, Enrique and I rowed the small pilgrimage to the church on the lake. One is supposed to ring the bell in the tower for luck be we take a swim instead. As we row back a tiny fishing boat tussles with a big catch and lets out a hoot of victory, we draw close and the proud fisherman hoists out the keep net with all his might a monster pike, emerald shimmering scales and teeth of nightmares.