The night before, German guest Nils Raabe and I had mused over a plan to get some good hiking in with the potential goal of climbing the great peak Triglav. That morning we woke early to get some maps, ideas and latest weather reports from the Park Infocenter along with food from the market. I then got my morning hostel tasks done promptly ready for a lunchtime departure. The Bled to Bohinj bus doesn’t run that often so we scribbled a sign and tried our luck with our thumbs by the road. Ten minuets later we were hitching on our way, the first lift from a spinal doctor on route to a patient, the second from a local young downhiller who went out of his way to drop us of at the Slap Savici (waterfall); our trail head for the Seven Lakes Valley.

The first hour is a steep trail from the valley floor to the Black Lake, it then flattens through lush forest which slowly thins as we pass the tree line lake by lake towards the Zasavska koća Ms Prehodavci hut. We make good progress and I’m thankful for Nils’s keen eye for photography, slowing us to soak up the scene and chase bumble bees about the thick patches of flowers. Mountain goats stroll around the rocky outcrops and we startle a fat marmot from its afternoon sunbathe, perfectly calm lakes in their rock mottled surroundings are rendered invisible mirrors by the landscape. We arrive with a large group of young scouts wonder if there will be room, but the small hut accommodates all, treating us to vegetable broth. The scout troop quietly sing a few Slovenian hymns to the mesmerizing sunset above the clouds, with Venus remaining to watch over us as we scramble down to the outhouse.

We rose early, our first task to refill water from the source below the hut (no running water here), then press on over the Hribarice pass; a strangely desolate moonscape. Like space its eerily silent, no whisper of trees or hum if insects, just the odd butterfly and some wheezing walkers. Sliding down the scree slopes into the main valley were treated to the full sceptical of the great mountain against the thin dark blue sky. We skirt round to the Dom Planika to avoid the hard rout up to the summit arriving as some cloud set in at the base of our final ascent.

The path is steep with loose rock, a passing Russian girl tells us with a wild eyed expression that the rout was hard, she look far more prepared than us but we promise each other we would turn around if we felt at all uneasy and keep going. One had over the other we made or way up the via ferrata (steel pins and cables) to the main ridge line where huge drops either side gave way to views of the whole Julian Alp range. Passing the odd group on the narrow knife edge we finally make summit with a big hug, both of us had pushed ourselves for this. An rocket ship looking can marks the top; supposedly inside is a paddle to spank the first timers but we unfortunately forgot, oh well.

At the top I toast a sip of Rose to departed friend Rae Pinx, who will me missed.

We make our way back along the ridge and down the easier eastern route, steep but less lose rock thankfully. A rest at the Tiglavski Dom then on down scree and serpentine tracks to the Vodnikov Dom where a month previous I had stayed. As we approached big thunderclouds rolled in sealing our choice to take a bed and tackle the last half of the descent tomorrow. As lighting lit up the walls of mountains around us we drank through the various homemade schnapps; honey, pear and spruce pine cone over a big spag bol.

Last day in the mountains we woke to clear skies and set off down the long path to the valley floor following the same route I had walked with the horses. As we drop out of the cool high air the grass valley arrives hot and dry as it carries the river to the lake through deep swirling gorges. The 11:50 bus target slips into the unlikely so we slow the pace for a refreshment and enjoy the view of lake Bohinj.

Thumbs out and within a few minutes we’re hitching a ride back to Bled with a couple driving around Europe just in time for lunch.

Back to the Vila Viktorija

The evening brings lots of food, drink and good people as we celebrate Anne’s last day at the hostel. It’s only been a month but it’s been a one packed with fun and friendship and we’re all sad to see here go. Life surrounded by travelers is by nature transient and the constant goodbyes emotionally grueling, but the heavier the sadness in leaving only goes to prove the strength of the joys shared. Luka brings more strange homemade boozes which do a great job of slurring us late into the night.

Hungover we sip coffee and say a final goodbye to Anne on the early bus. A big part of my love of Slovenia leaves with here little form, dwarfed by her backpack but we will meet soon in Croatia.

Back at the hostel old University friend Sam and his girlfriend Chelsea visit for an afternoon walk, drink and catch-up on things UK, sharing a few trip ideas by the lake. Pia and I drive to the airport to collect Débora; the new volunteer fresh form Lisbon, within minuets of arriving seems to be part of the gang, keen to explore as well as change beds.

My last days are slow, packing is a horrible chore which turns leaving from a joking threat into a reality. Anja, Débora and I relax with a few tins of Laško between lake swims and I finally get a chance to try the big rope-swing from one of the trees into the water; as I fall the 15 or so feet I glance a huge catfish shadow on the lake bed below.

Final day at the hostel was kept busy showing Débora the routine (which she didn’t need, she’s already pro at this game) and a big team effort of odd jobs. Once done we cooled off with a swim and settled into another round of leaving drinks. It was a truly heartwarming send off, emotions shaking with sadness and laughter the whole night. Gifts, hugs, drinks were exchanged – given the hangover – the drinks maybe too generously.

Bike packed we met for coffee and final goodbyes. Leaving the Villa Viktorija was tough, I could barely mumble my gratitude to the gang through the huge lump in my throat, as rolled down the drive I streamed tears, but I was riding towards Croatia and onwards to more new experiences and hopefully Anne.

Back on the road after my month off the day hit me hard, hungover in 33 degree heat really tested a person. My mood swung with raw feeling as I wrestled the miles south towards the border, my left leg regularly cramping up. Tired and broken in a small supermarket I forgot what expression I normally wear on my face. I drifted through Postojan, famous for its caves without raising my gaze from the tarmac. The day finally ends in a grassy field overlooking a valley, the farmer passes to feed his flock but just shrugs in response to my camp. Slept without tent rain cover dreaming up at the stars.

Entered Croatia early following the south coast of the Istria peninsular to the first ferry of the day; Brestova to Porozina on the island of Cres. I skipped from oasis’s of shade as midday sun kicked in but the barren landscape offers few. Second ferry was from Merag to Vabliska on Krk where I waited for the final ferry of the day with a large pizza. Two hours and all my phones battery later and the challenge of getting to Hvar to meet Anne in one day was proving impossible to plan; no ferries running, no same day trains, no bikes on buses, no shuttle buses, no ride shares only one option remained and it scared me, ride it. The last boat landed me on the island of Rab at 10:45 with little energy. Luckily a car park by the ferry backed on to a scrub field where I rolled out air mat and slept among the lorries, alarm set for 4:45am. 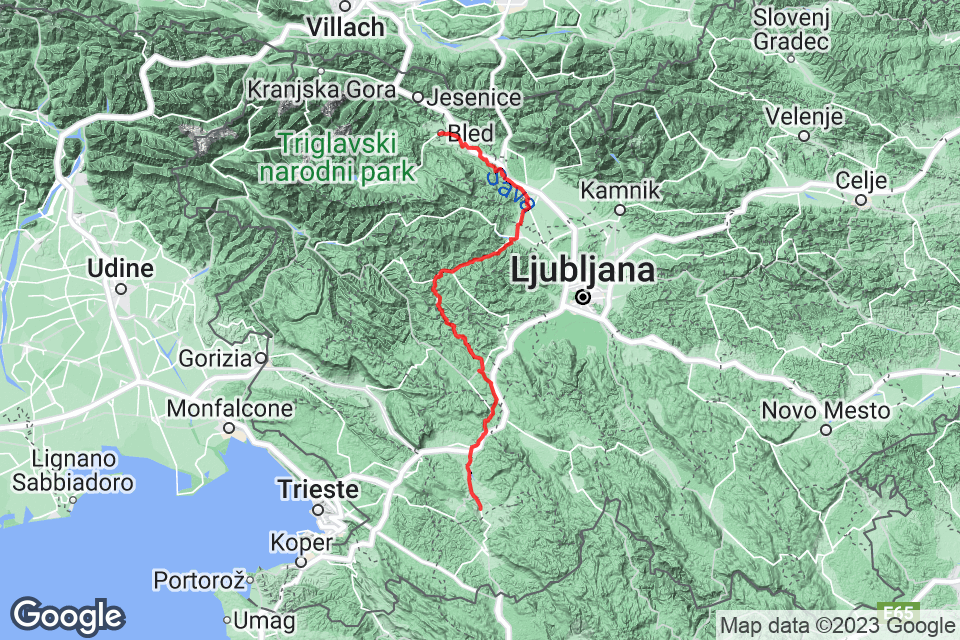 Hot and hungover, one of the hardest days on the bike after saying goodbye to dear friends at the hostel. 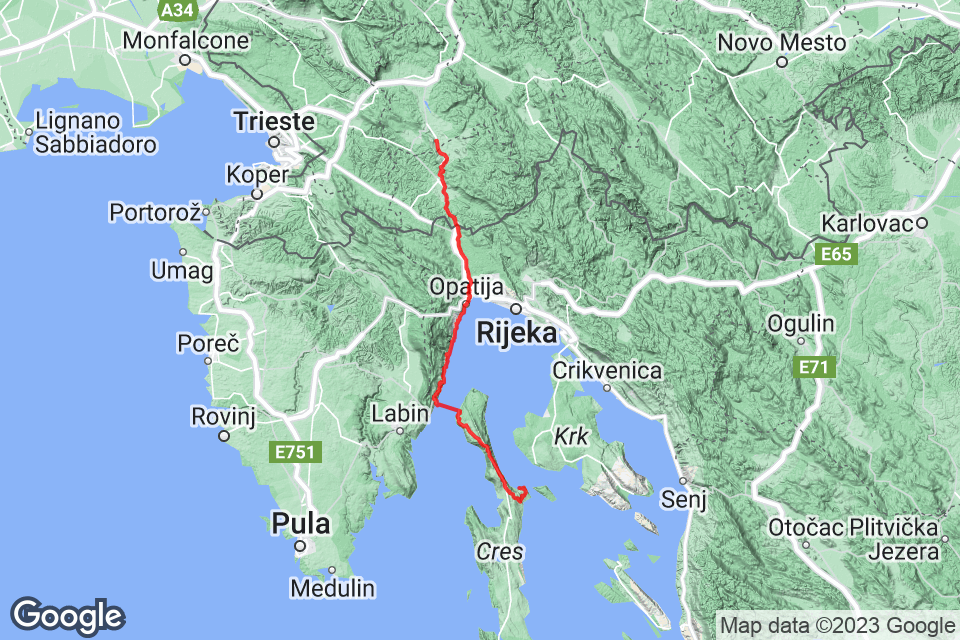 1 ferry from mainland to Cres. Then got the ferry from Merag to Krk and on to Lopar on Rab