Twenty one and a half hours on a bike

The 5am alarm rang but I was already awake with a seance of dread for the task I has set myself; it was a daunting one. Anne and I had a small AirBnB booked and I had a day to get there, even traditional travel options like train wouldn’t get me there on time, so let’s try the bike. Besides I’ve always wanted to see how far I could go in a day.

The island of Rab (original home of naturism thanks to King Edward VIII) passed fairly quickly as the sun rose but rounding the headland towards the ferry I finally after 2500 km met my nemesis, fully unleashed; a gale-force headwind. At first I laughed when I found myself in the lowest gear peddling down a 10% gradient hill hardly moving but it cost me the ferry I was aiming for. Glad it was still running the Rab to Stinice crossing was rough but gave me a chance to wolf some food down.

The wind clocked in at 35 mph gusting 50 mph on the mainland, keeping the bike on the road was hard to say the least, using every muscle and all my whits like a boxer to weather each gust to keep upright. As it hammered down the hillside I roared back at it. The large road was empty thank god, but felt like a type rope. I stayed as close to the central line as possible but twice was blown off into the barriers, which guarded from the verge-less big drops. Exposed sections brought a primal fear, any speed was madness. Arriving at the Prizan to Žigljen crossing I lay on a bench feeling battered by the hot wind, only for it to take one last swipe knocking me on to the deck.

Pag is an island also destroyed by the wind. The landscape is stripped sharp rock, burning in the sun but the last of the wind is in my favour (for now). Through the 33 degree heat I keep the cranks turning, mentally ticking off place names.
Sibenik looks beautiful with an air of Baltic Canne as the trip computer passes 200 km. I stop at a restaurant for pizza and called home, familiar voices adding some emotional support. The clock read 8:00 and the sign to Split – my goal, 75 km, maybe this was possible.

Renewed by the food and the desert the old boy at the restaurant gifted me I pulled out my bike lights for the first time and set off with a slightly crazed smile. Hours of climbing passed into the pitch black, the cool air a welcome relief. Round midnight the view of Split finally came into view 400m of fast descent below, eyes darting to read the steep road and switchbacks in the night.

It felt like an arrival but the conurbation around Split keeps me riding to 1:30am when I finally find the ferry port in the centre full swing into a street trance festival. The next ferry to Hvar is at 5:00am so I try and seek refuge form the drunks (half of which are British of course) dozing in the bus shelter. The trip computer reads 275.2 km as I black out into a deep sleep on the ferry before it leaves the key-side. 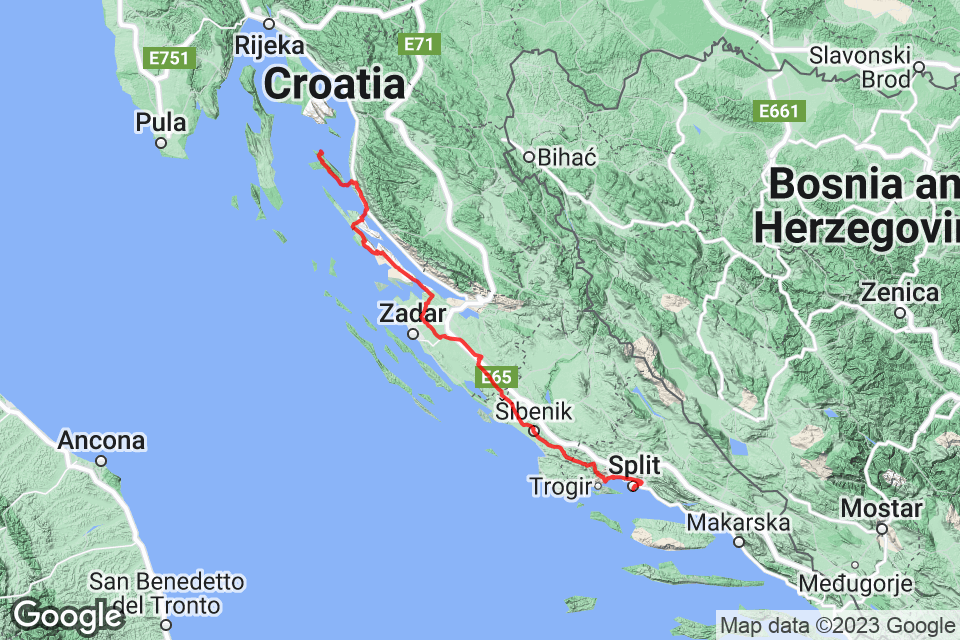 Full blog post: http://paullferguson.com/the-longest-day/ The longest day on a bike so far. 4 hr sleep under a lorry for shelter then 30 mph headwinds gusting 50 mph in the morning, barren Pag with 35 deg heat, 3 ferries the last of which was at 5am but all worth it to meet beautiful Anne on Hvar. Though I then slept about 17 hours the next day (sorry Anne). Not quite Mike Hall yet.

However the journey isn’t quite done; at 7:30am I roll off the ferry onto Hvar peddling slowly through aching joints towards Jelsa. Functioning on fumes I find a small beach near the apartment and lay down to sleep. Stereotype ringing true, a German man lays out a families claim of towels before leaving me with the beach to myself.

At noon I’m waiting as Anne steps of the bus to big hugs, we find the apartment and I dispite my best efforts to be sociable fall sleep for rest of afternoon. She make an exquisite spaghetti and I feel human again. We’ve finally arrived in Croatia.
The next five days we enjoy a more traditional holiday; swimming of the quiet rocky beaches which pepper the coast, take lazy walks to nearby Jelsa for glasses of wine while picking up supplies for the evenings meal. A simple but perfect days routine.

We take a pan of risotto down to the rocky shore to watch the vibrant purples and reds of the famous sunset. Alfred Hitchcock supposedly referred to it as the most beautiful he had ever seen if you believe the guide book, either way we agreed.

It’s was our little escape and one I’ll cherish.