Anne and I have have taken our week in Hvar very easy, so with one last day we got a little adventurous; Anne proposing a swim across the bay, just over a kilometer. We packed a few things into a drybag within a drybag and enjoyed the swim across, dodging the odd speedboat and the island seaplane, walking back through Vrboska to Jelsa for our final meal on the island.

Parting the next morning was rough again for us both, it’s hard to know if we will be able to meet again. As the bus crawls away, the postcard perfect town of Jelsa suddenly feels very empty, I’m left heavy with a sense of saudade as its know in Brazilian Portuguese.

Leaving late I ride the length of the island along a road designed as if for a cycling photoshoot but my hearts not in it. At Sućuraj I sleep on the shore opposite the harbor. Its a late Friday evening but someone decides to start moving large rocks around on the cliff 10 feet above, I’m perched to dodge tumbling rocks but soon left to get some sleep.

Queuing for the 6:30 ferry to the Croatian mainland I’m rudely spurred into cursing by a wasp sting to the neck, Fucker!

Following the coastal road I’m caught by two Hungarian cyclists Ervin & Lojus, they are friendly and we have similar plans so we roll on as a gang through Croatia’s more agricultural lands. Approaching the Bosnian border the que of cars backs up for miles, though the range of nationalities sitting in the heat is interesting, a quarter might be local but a huge amount are Swiss, all in high-end German cars with tinted glass heading for Dubrovnik.

We lunch in the Bosnian seaside town of Neum; taking shade with some Balkan tourists on the beach, they kindly fill us with water melon as we sit out the afternoon heat. Sun abated we ride onto Slano with it’s crystal waters to cool off. Two French riders find us and we cook on the beach, French always seem to pack ready to prepare meals fit for a king. Laying out the sleeping mats in the corner of a basketball court we try and get some rest but a local music festival blasts across the water late into the night, ending in a huge firework display.

Dubrovnik is our stop for lunch and midday shade, the old town is an tight stone maze of shops and restaurants, the walls magnificent and fountains mercifully cooling. It truly is a Kings Landing although the crowds throng at a Venice standard.

The afternoon ride brings us to Montenegro and town of Herce Novi where British expat Jason Gold points us towards some good seafood restaurants which fill us up. After some snooping around an abandoned seafront bar is found to squat for the night. Still hot, covered in a thick grim from the road a midnight swim sorts us out, sea salt covered skin is still way better that what you find after a day on the road in the high Balkan heat.

The small ferry takes us over to the bay of Kotor; a huge fjords carved deep into dark mountains. The water is mirror still as a cruise liner passes by, the silent morning air cool in the shade of the peaks. It’s a enchanting place and one I regret passing so quickly, especially as we then plunge into a tunnel which brings flashback of my sour experience in Italy.

Our midday break falls in Budva a bustling beach resort, the halftime swim is becoming an important point in our days schedule. A long 900 M climb takes us up and over to Lake Shkoder, a huge expanse leading across to Albania in the evening haze. We struggle to find a place to sleep eventually stopping around 10pm, camping in an old village concrete lake, low on food and moral. The air has a high pitched whine of mosquitoes which make for an uneasy sleep.

The Virpazar to Vladimir road was maybe not the best choice for speed in retrospect, all hills and bumpy roads with very few places to resupply; Ok for me but with the other two traveling lighter we were stretched for sustenance. A bumpy road surface wears the rider but the bike takes the real hits, Lojues left pannier rips itself from its mounts so we lash it back to the rack with a spare shoelaces and bungees, transferring out some of the heavier items to help relieve the bodge. Much of the landscape is barren scrub but occasionally it runs for stretches of ancient almost English woodland.

Motenegran hospitality is in full bloom as we stop to check the pannier fix and I ask for water at a house. Were promptly ushered to the terrace and seated below kiwi and grape vines to be served ice-cream cake, pints of pineapple juice and rich Turkish coffee. They even give us bottles of frozen water which brings euphoric levels of refreshment. Its a well timed feast and we thank the recently retired couple for filling our bellies and lifting our spirits.

We top out another 912 M pass with long views over lake Shkoder, a slightly baffled looking German family tells us the car thermometer just clocked 38 °C, luckily it’s a breezy downhill to the Albanian border.

They barely glance the passports at the border and we enter into what really is starting to feel like a change from Europe. Albania is up and coming and keen to move on from its darker days closed off from the world as one of the last European dictatorships. Currently it awaits EU membership and to the south tourism is creeping in, finding beaches to rival Croatia and Greece without the high prices.
Riding towards Shkodar the road is littered but the surface good. A call to prayer rings out and I’m struck with tingling sensation and a smile; I’m starting to feel worlds away yet all I did was leave my front door on a bicycle.
In the bustling town we take a big lunch celebrating the Anglo-Hungarian partnership, Shkodar is Ervin and Lojus end point, the enthusiastic teacher and Policeman from the Hungarian borderlands will be missed. I wish them all the best with the return leg of their trip back up to Croatia, maybe the coast road this time.

Alone again on the long flat road south. The company was good, but I have a new target; our good pace meant that their was a chance I could make Corfu in a few days and spend the few last days with Anne before her visa finally expires. She proposed meeting half way but ferries and flight timing meant it would be better if I just got to Corfu. Once again I’m racing across a baking country, but its worth it.
Many people stop and stare at the alien cyclist dashing past, lots of cars hoke horns and wave with support, while younger folk often shout Hello! or Hay Mr!.
Hill fires burn, though I can say if they are accidental or not, though the rampant fly tipping can’t help.

The road is consistently peppered with urban trappings making for little camping potential. I find a potential spot in a building site but discover beds laid out already for the builders – thankfully they are out. Moving on I spot some shops set apart from the main drag with stairs up to the open flat roof which is hidden from passing view. I cook some food in the shadows to the side then sneak bags and bike up to the roof keeping as lower profile as possible. With just the roll mat and no need for even a sheet I get some sleep watching satellites cruise above.

The duel-carriageway is busy but offers flat quick miles and a spacious hard-shoulder to sweat away into.
I stop for a coke and facilities at a quite restaurant and take the opportunity to forgo 3G and Google translate to get some language notes from the young man who works there. I’m invited to the regulars table and we talk for some time. The friendly old man at the table then turns, holding my arm closely, he starts to talk with a heart and anger while poking the map. He pencils down the year 1973 and speaks bitterly of London, Churchill and the US dicing up the boarders of the region. For him the halving of Lake Ohrid with Macedonia and Lake Shkodar with Montenegro was unforgivable. My notebook gets forcefully waved at each of the characters around the table, gesturing the reallocation of nationalities many Balkans faced during this time. He recognizes I’m of a differnt generation but I feel a very real anger still these years later. The conversation turns more lighthearted again but I notice the young man quietly rub out the year in my notebook. Old national wounds are complex, even within a families generations, but new Albania is looking forward.

The road is mainly flat and despite the 38 degree I make good progress to the coastal town of Vlorë. Down a small side road I find a tourist information hut – the first sign of the industry. She looks surprised to have a customer. After a few calls, inquiries about alternative boats to Corfu returns nothing; the port of Sarandë it must be. Damn it. She also speaks with warning of the road ahead; hilly with bad drivers. The last section of the day’s ride ends with the Llogara 1000 m pass straight up from the beach. An sleepy restaurant at the top looks inviting, it’s been a 198 km day ending in a high pass so two main courses get wolfed down. Sleep for the night is among some trees near the top, the air is cool and for the first time in a week I’m granted control over my body temperature which brings immense comfort, unlike the stray dogs which fight into the night. 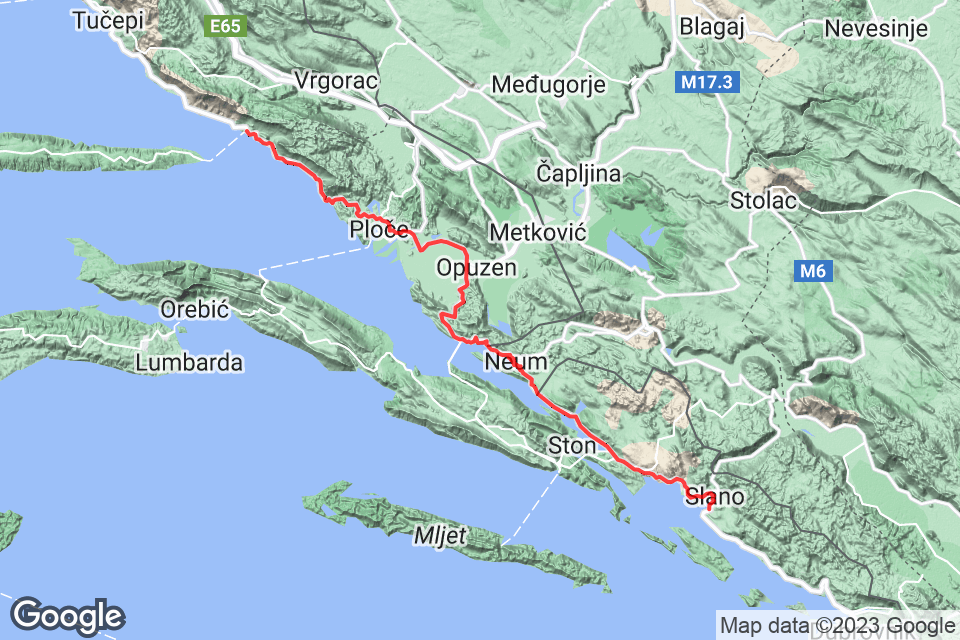 With Hungarians Ervine and Louje 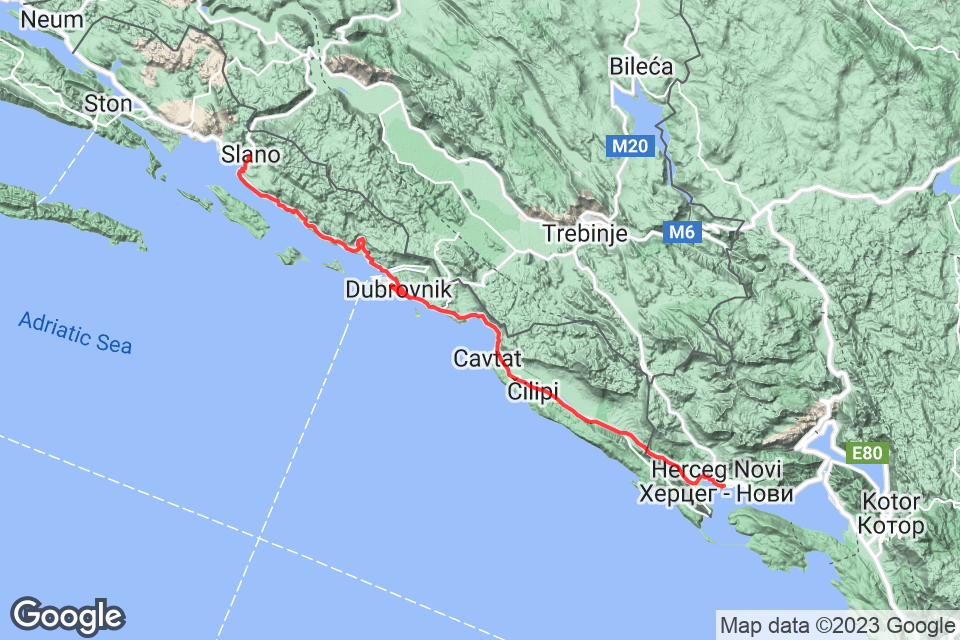 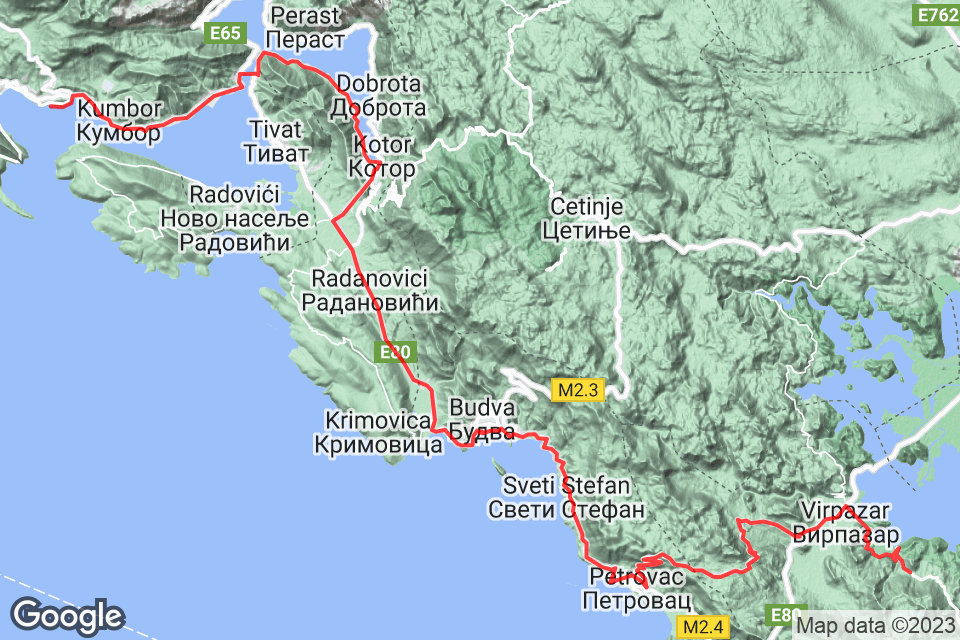 Riding with Ervine and Louje 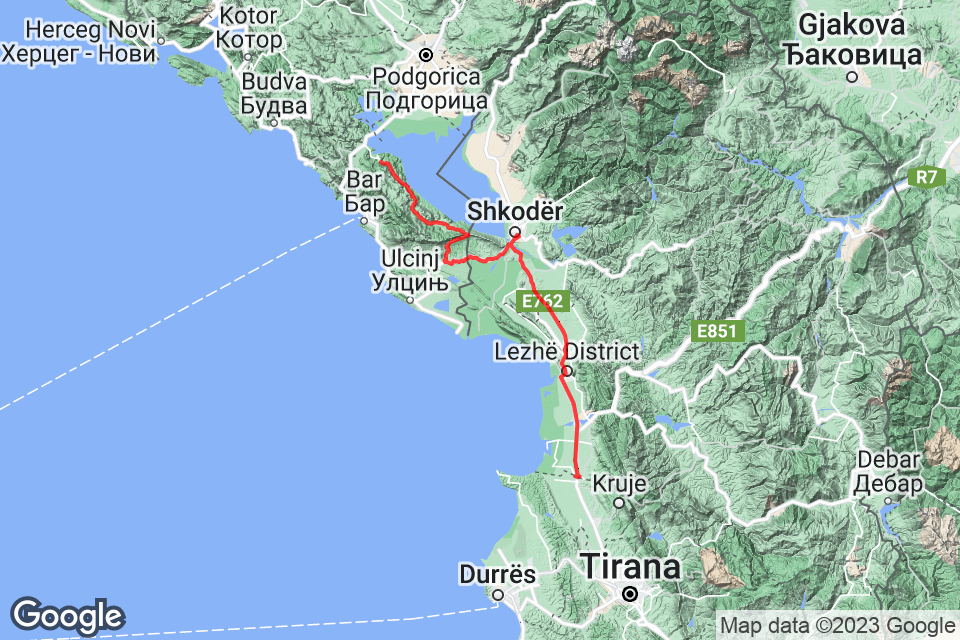 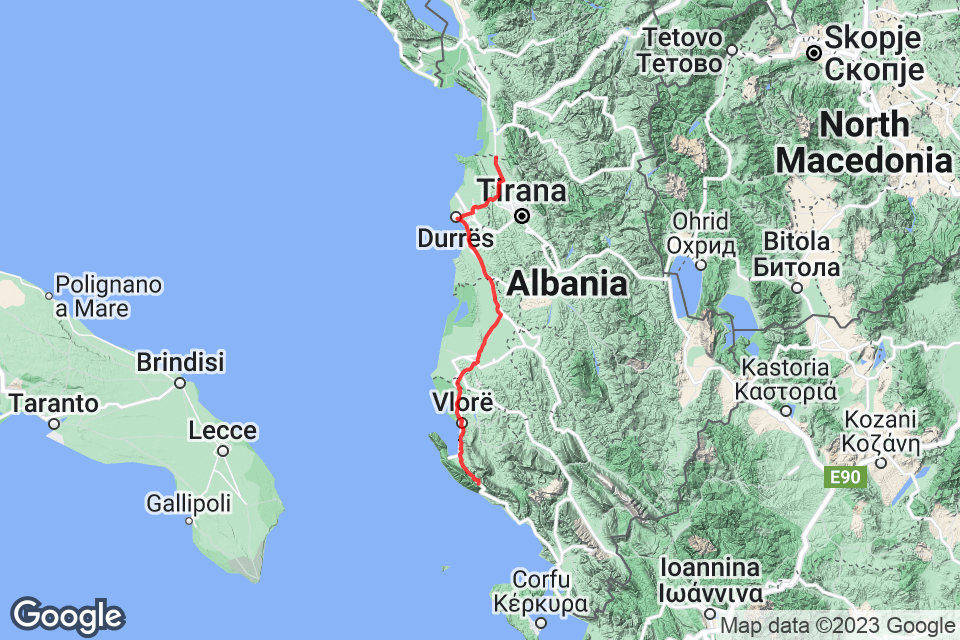