The stray dogs of Albania’s Llogara Pass look puzzled as I emerge after a night undetected. Rolling down towards the coast I sit for coffee looking out to sea while a puppy gives me a chew, a much happier hound. After the generous downhill the rest of the coast road is a mean collection of small steep hills. There’s about 80 km to get licked before the 1pm SarandÃ« – Corfu ferry which seems fine, at first. Progress is slow, the clock is ticking, I’m a little frantic and make quick stops for easy to eat on the go food, pedaling hard. I dear not look at the time, for I can only go a fast as I can go. SarandÃ« mercifully arrives, I ask for directions to the port “Down the hill and right”, “whoop” with joy and they cheer me on. A horrible dripping mess I ask for a 1pm ticket, she looks confused, “you mean 4pm?”.
I’ve run myself ragged against the wrong timetable, fool.
The small ferry motors to Corfu and I make my way across hectic island roads, one last climb and I roll down to the Pink Palace to find Anne, she’s brave to hug such a dust caked creature.

Corfu for the lazy

The Pink Palace is a strange place; think 80’s resort Dictator chique dipped in pink. Each night has a drinking theme and the organised fun is highly organised. Misogyny fest aside the free buffet breakfast and dinner are a joy to my stomach. Anne smiles and keeps passing me food, as a vet she’s used to working with stray hungry dogs.

Days are wonderfully lethargic on Corfu, we plan a bus rided to another beach but choose wine instead.

Our last day comes too soon again, I wave goodbye once more and fail to hold back the tears. In three days her European visa will expire and she flies from Lisbon home to Rio. It’s so hard to know what to do next, heart and mind wrestle as I retrace back to the ferry and Albania.

SarandÃ« port surprises me with doppelganger Sam; a bearded Englishman on a heavy lookingÂ bike hunting for a hostel. We find the Dolphin Hostel which holds even more British cyclists in the form of Judith and Becca who with little prior experience proved you don’t need it to do some serious touring, just an awesome attitude. It’s great to talk shop and share stories of our different experiences on the same roads. Sam has similar trip aspirations to my own, both of us also like the idea of company past Istanbul so we agree to rejoin there for the long haul East.

The day before I mistakenly withdrew 50,000 Lek instead of 5,000, which meant I had about Â£250 in a currency I didn’t need and was hard to exchange officially. Luckily I was able to trade it for some â‚¬ with some guests and hostel owner to which I owe a great thanks.

Climb out of SarandÃ«, two fellow riders coming the other way spoke of broken surfaces and big mountains, exactly what I was hoping for, time to test the bike and myself on the rough stuff.

A small boy speeds alongside me, bicycle ancient, cloths threadbare, he beams at me with a hop of a rock while we race, then with the chime of a WhatsApp notification skids to a dusty halt to attend business. Technology is prevalent; Fruit vendor on the roadside sell fresh melons for pence while racking up high scores or watching football on their phones.

An old bridge with a dried up gully is accommodation for the night, waking to the familiar chime of sheepÂ and their herder passing at sunrise.

Albania is clearing itself up but is struggling regarding it’s rivers; truly they run some of the clearest waters I’ve ever seen but dumping of litter is widespread and painfully ironic given much of the litter is plastic water bottles, because the tap water isn’t safe to drink.

Things often have ShitjeÂ written on them; For Sale in Albanian which always brings a giggle.

Most buildings, even those bearly built are blessed with a teddy bear (or as they are called in Albania, a monkey which make just as little sense), they help ward off evil spirits and bad luck tough often look more like tortured warnings, sun-baked hanging from rope.

As promised the road up the PÃ«rmet valley is in a bit of a state, sections of gravel road are fine, it’s the old broken Tarmac which has you weaving all over to find the smoothest line. In a small town cafe I call a few friends back home, it’s comforting for the soul and helps with some wandering ideas.
Stunning peaks with tiny patches of snow rise up to the right, the range continuing down and on into Greece.
Beckoning with fly swat an old lady invites me to her rudimentary restaurant. A few plates of various vegetables accompanied by a lump of mutton appear and we sit without conversation watching the empty road for a while avoiding the high sun.

For the first time stray dogs take chase. Being barked at is a normal part of cycling but since Croatia the eyes of many of the roaming mongrels have had an added sense of menace thanks to deep orange or red eyes. One leaps the fence and chases me down, at about ten feet from me and snarling I spray it with my water bottle and it skids to turn tail. Heavy boots no longer feel a bad choice on the bike and pepper spray is ready as a last resort.
Most dogs seem to belong to the herders and have no idea what this colourful coasting cyclist thing is, so I try whistling as they do which seems to work, giving me enough of a human hint that they loose interest.

The road keeps climbing, lifting out of the arid valleys to rolling forests of pine. Traffic is rare and settlements few but your never far from a goat herder. A family is making its way up on horses, the two small boys ride in plastic crates lashed either side of the fathers saddle. Seemingly in the middle of nowhere the Farma Sotira campsite appears in good time, all sorts of animals run about the place and the small restaurant straddles a trout farm. Meat or fish are the two food options and with an order of the latter the waiter plucks a trout out of the pool next to us and 15 minuets later it’s back with a huge side of chips, perfect for the British calorie fiend.

Descending gently towards Lake Ohrid one passes grand roadworks gouging a colourful scar down the valley. They look too quite, a digger driver is sleeping under the bucket of his machine, then a huge blast; rocks are fired high and a shock-wave thumps past followed by the patter of geological rain on the road ahead, the scar cuts deeper.

A local road cyclist – only the second I’ve seen, rides with me the last half, hardly a word is exchanged but none are required to appreciate the ride together on the smooth ribbon of fresh tarmac.
There’s a bit of a beach-side atmosphere to the shores of Ohrid and a campsite dose the trick. Strangely the only place to eat is a hotel where I’m treated to fine dining, very extravagant, especially given I’m the only customer and rock a slightly feral vibe. 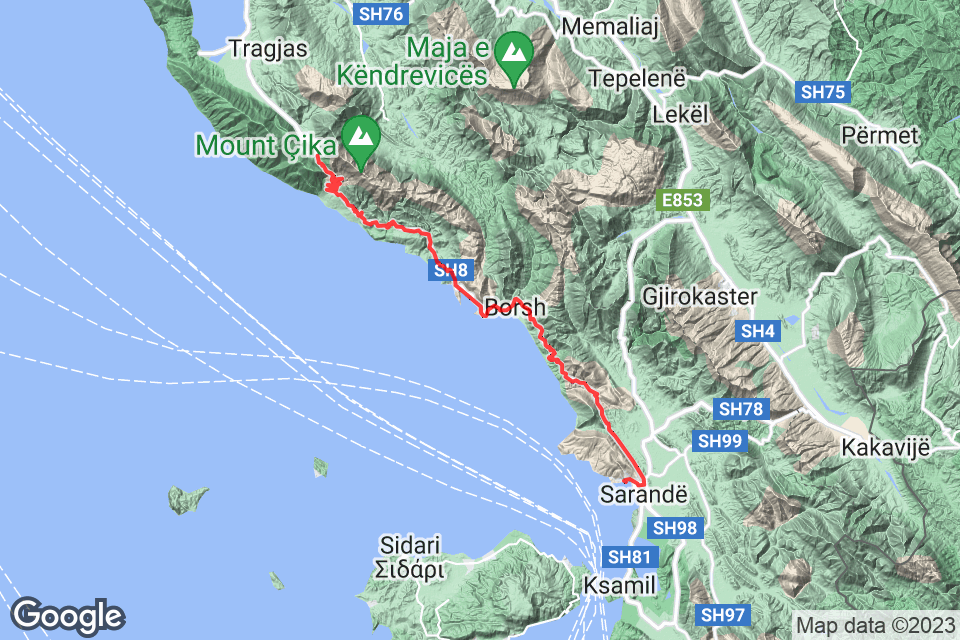 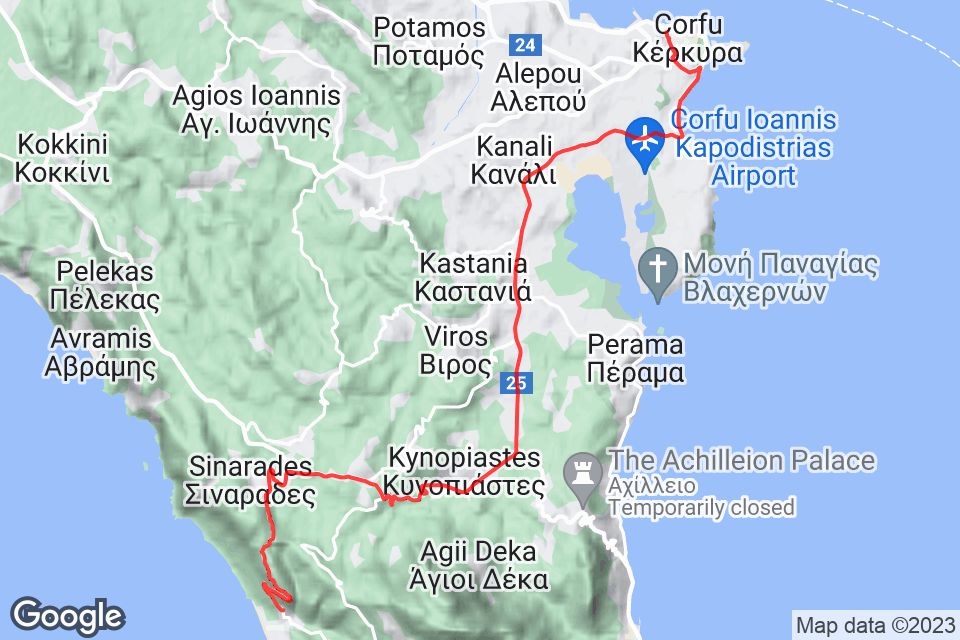 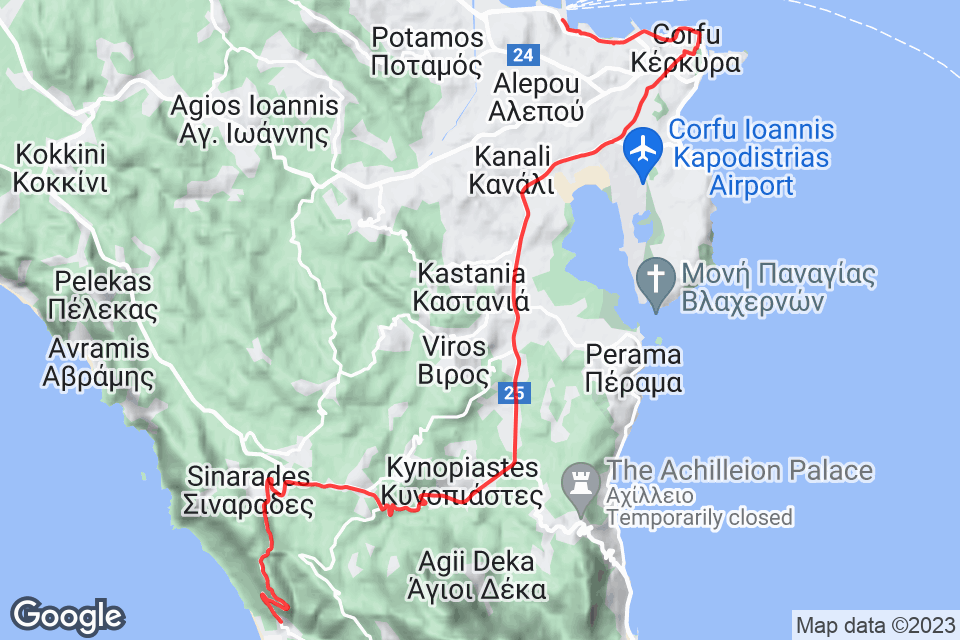 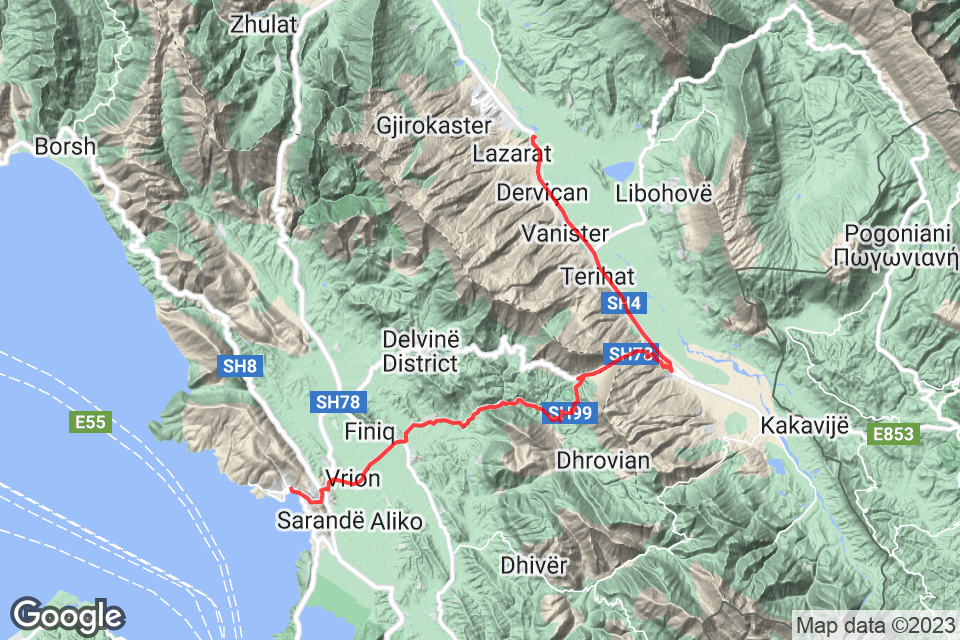 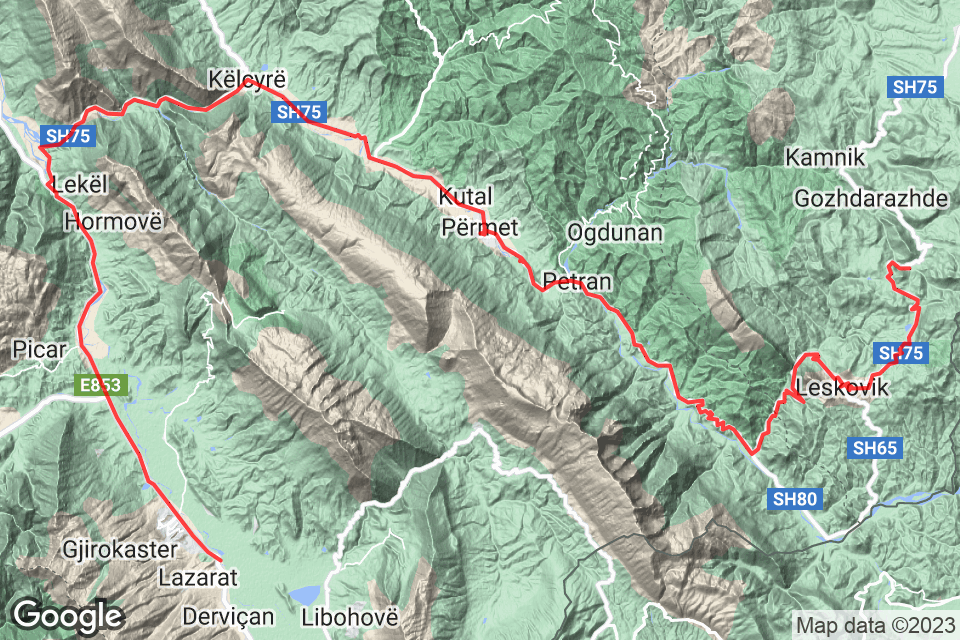 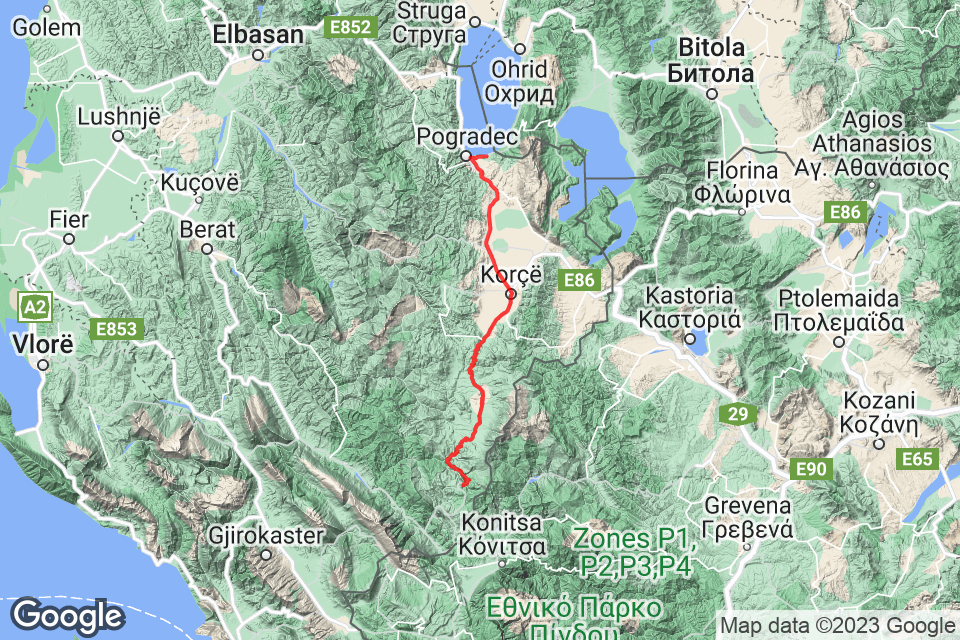