After a morning start with two puncture it’s time to swap the front tyre, it’s put up a valiant effort but now the tougher spare must lead the way. Things go much smoother. Just before the sun sets I halt at a truck stop for some wifi and general life admin. A common routine, usually just for a beer or coffee before the light goes, but the young chef Sahin is chatty and soon a few more beers appear. As night falls I ask if I can sleep round the back of the cafe, he more than happy to accommodate, a few plates of his favorite dishes accompany the beers. Chain smoking into the night we talk of football and aspirations, next year he will be leaving for university to further his culinary passion. His brother joins us as midnight passes, but the mood drops, he’s found photos of me on Facebook; I’m wearing a bra which sparks angry questions of manhood with a homophobic twist. Discussion is hopeless through a thick language barrier reinforced with raki and an army background, notions of gender are set solid, he soon leaves us to our lighter conversation.

Bleary eyed I wake with a hangover for the first time in a month and join the truckers for a sunrise chai.

A slow day of beach naps follows, the week of short night sleeps catching up with me, the miles seem heavy.

After a few big hills I slow across thick flat farmland, a utter lack of momentum stops dead at a fruit stall amongst the fields, two peaches and a quick nap should do the trick.

Three hours later I wake from a deep sleep, the departed sun only a hint of orange against the greying sky, I’m not so keen on finding a camp spot in so late in the day, but the father of the family wanders over, without even a hello he just smiles and passes his phone with a translation “there you may sleep tonight”, a mind reader. The husband, wife and two teenage daughters laugh constantly telling jokes and playing games while they work the stall. I’m welcomed into the high spirited family and their colourful garden with a fine meal, we sing karaoke with a tiny speaker box and call-centre style mic, closing the night with a few games of cards. Losers forfeit to hope one legged round the table.

In the morning I help with some welding and use some ancient sports skills to chuck a truck load melons about. Breakfast is wholesome, interrupted by the fathers cheeky love of loud banger which are maybe meant for the birds but do a fine joy of entertains us as one turns a melon to fleshy fragments and vapor.

On the coast road to Bodrum I rest in a lay-by, a family share a can of Coke with me, playfully competing with one another to test their English. The parents and six young children live in dilapidated van, a stark contrast to the Golden Elite Resort and many like it I’ve just passed. I bet none of the resorts would have been so kind despite the disproportionate value of something like a soda.
Bodrum is a busy tourist hub, it’s waterfront buzzing with huge Gullet tripper sailboats and trinket stalls, I bag a nazar boncuğu blue eye to ward evil from my bike.

The ferry takes me two hours south across to the Datça peninsular, a great route from a Turkish rider to avoid the big roads and hills going east to Marmaris.

It’s a evening 15km dash over what transpires to be a substantial pass, descending to the village of Mesudiye in bumpy darkness brings a great air of mystery. It’s the beachside strip of shacks I’ve been dreaming to find among Turkeys resort high-rise.

The campsite shower is the first in well over a week, I’m sure the local dogs are grateful. Shown to my pitch I opt for the hammock next-door, no need for a tent in this haven. Down on the beach I cook under a tar black universe of stars, so bright it’s hard to distinguish consolations among the twinkling crowd. I takes half an hour to repack the a cigarette with the weed I was given in Izmir, if there was an effect it was psychosomatic but appreciate.
Back over the pass and along quiet roads I cut down a track passing stacks of bee hives to sleep in woods. Trees and scrub roar with cicadas, then as is if a switch was thrown the fall deathly silent with the darkness.

With a day to kill I find another rough track leading towards a cove, it wanes to a rocky path as it finds the secluded beach, not a soul about. I swim out to some rocks to cool off.

Back at the beach an old man with a canoe mills about, we salvage a few carrier bags and fill up ten or so with litter from the defenseless small beach, humans are the most careless creatures. We share a smoke, no words have passed, none need to until he gestures “cafe?”. I swim round the headland following him to a tiny fishing boat levitating on crystal blue, moored off a hermit dwelling in the shrubs. Sat in the shade on his boat he prepares coffee on a small decoratively painted stove while we chain through pairs of rolled smokes till I’m nauseous. I sip from a One Direction mug, I wonder what he would think of them. The boat is his bed and kitchen, it’s cooler out on the water, less insect visitors. He used to fish but now just sleeps the days away, tending to chickens, bees and a heavy nicotine habit.

After an hour of dozing without a need to chat he rustles up an impressive lunch and bags up a jar of honey for me to swim back with. My offer to help is refused as he leans over the side to washes the dishes (and his false teeth).
It’s a beautiful oxymoron; we share the rich solitude and I am truly grateful, I wonder how many people he invites, never mind a raggedy Englishman. Noon sun abates and with the deepest thanks I dive into the azure back to shore.

Tomorrow I ride into Maramris and this bike chapter of the journey will draw to a close, I begin a new leg sailing the Mediterranean.

Riding Europe has been the most remarkable experience I or no one could have ever planned beyond just leaving. However it’s taken twice as long as hoped. The next leg was to ride to China, unfortunately so late in the year I’m in danger of arriving to a Himalayan winter. I love a challenge but my naivety for adventure doesn’t run quite that deep. The dream of the Silk Road is stronger than ever but will have to wait for now.

When I left England my journey was fairly aimless, a few dreams and ideas strung along a thread on an atlas, the thread free to be blown about the page with winds of different futures.

Since Anne’s return to Brazil my travel East has felt a little more selfish as if against a tide, and with winter closing around one dream why not look towards the sunset in the west and the chance of seeing her again. To Rio.

For now; one last hunt for a safe patch to nest, one last camp in bone dry woods, one last dinner pot on the tiny stove and one last night of spellbinding peace.

As I brake camp, goats pass me, jangling bells sounding the days start, the elderly hearder giving a long nod, a goodbye for now and see you soon from quiet Turkey.

A shot ride drops me into Marmaris. Local bike shop Velomaris have saved me a box for the bike. Slowly my dearest partner in grime, my trusty Honeybadger is dismantled and kit packed around her to keep her comfortable as we part, it’s her turn to be the passenger. The shop help arrange the FedEx pick up and even let me shower. After some crossed wires the precious package is collected and leaves me with one pannier strapped to my back and lightweight rucksack on my front. I’m a backpacker now as the ferry zips me to Rhodos.

Half in jest the month before I had checked a crewing forum only to find a perfect boat looking for an extra pair of hands, it was crossing the Med allying my journey and schedule with suspicious fortune. Skipper Chris Price welcomed me aboard, shows me my bunk and hands me a rum & ginger beer. The prospect of a permanent bed seems a glorious luxury. I owe a huge thanks to my grandfather who used to take us out on his boat as kids, it gave me what is now a valuable experience and a foot in the door to what is a privileged opportunity to travel by sea.

The crew rounds up to four with new arrivals Mike and Tigs. After a massive provisioning we sail out between the iconic statues of the Rhodos harbor entrance towards the open horizon. We steer a course of 280. We are going West.

Tiny Panormitis on Simi is our first anchorage and it sets a high bar with clear waters and sleepy monastery. So peaceful.

It’s strange to be among people again and in such close quarters, but the prospect of travel by sea, wind and stars brings great refresh and a treasure chest of rich new challenges. 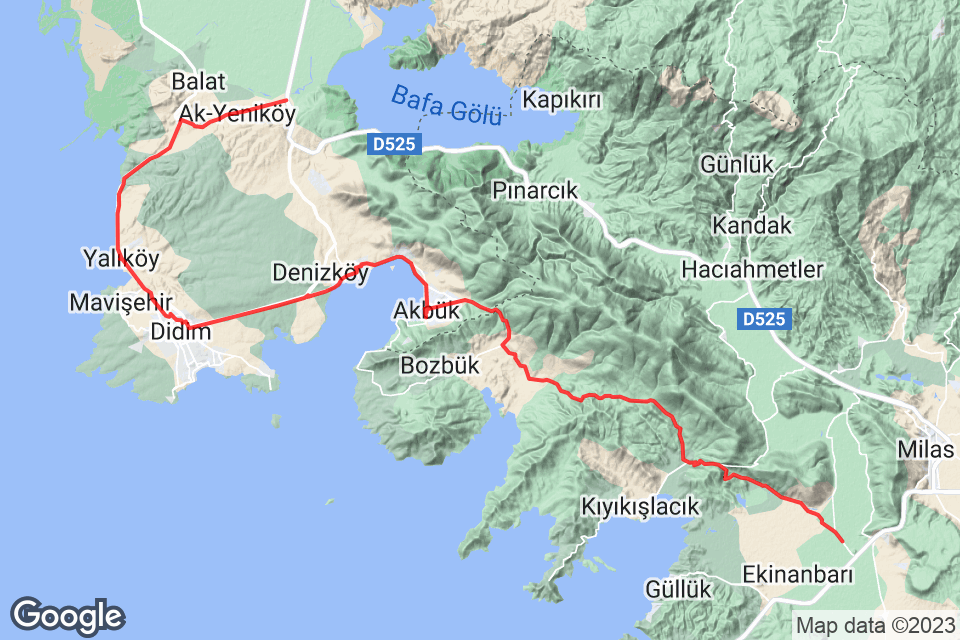 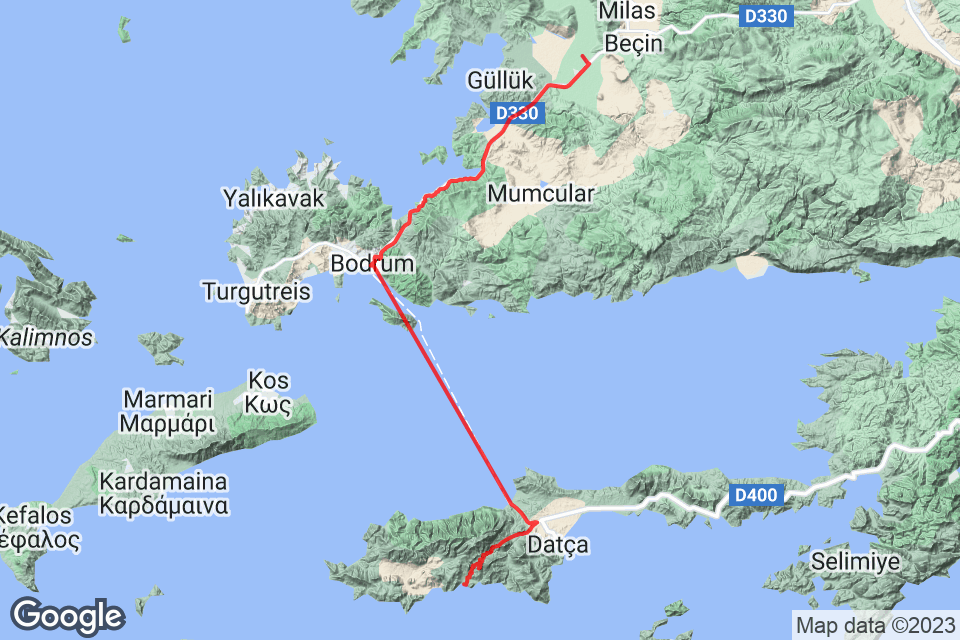 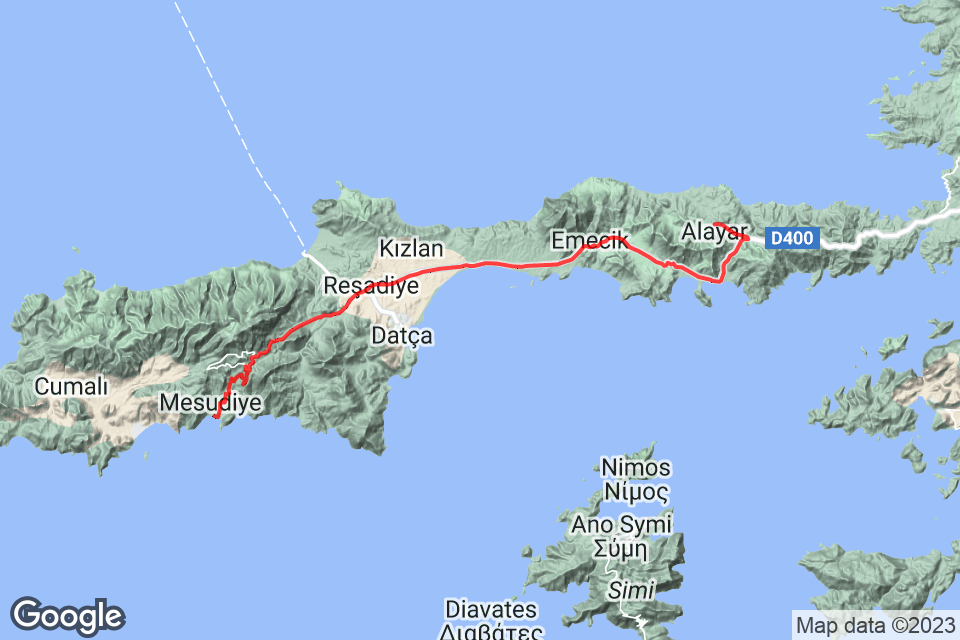 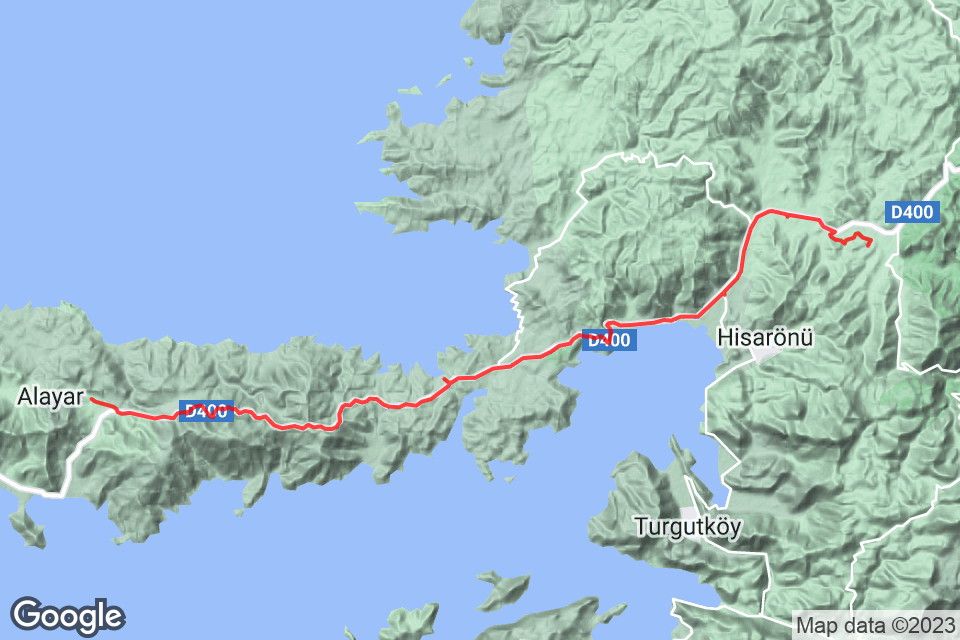 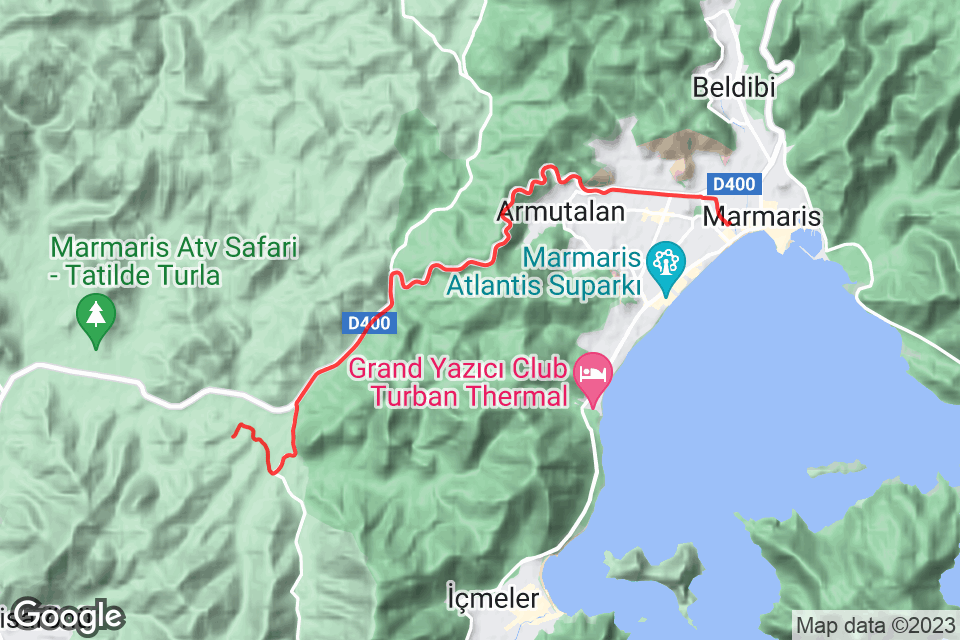 The last day of the European leg of the trip into Marmaris where my beloved Honeybadger was boxed up with help from Velomarim,