Its a peaceful start to the day on a golden Bulgarian prairie, staring up at darting swallows and treating myself to a birthday coffee. I rejoin the big road East, at one junction I decide to ignore the road closed sign to see what being hidden, turns out chunks of the road have sunk a few feet which adds some fun to road in my opinion. The old road is somewhat neglected again at the border, abruptly turning into a gap in the fence and building site in front of the border compound. Various booths check and recheck my passport and eVisa before the last boss level guard takes as long as possible to check my bags dragging it out over three cigarettes, without ever really looking inside.

Pastry sellers walk amongst the traffic and a huge mosque welcomes you to Turkish soil. Through Edirne I check seven petrol stations before giving up on my map quest, the Turkish have no need for such things apparently. I eventual find a cartoonish one in a large Istanbul book shop, while a Turkish tourer I meet has gone so far as to sourced his from Germany.

In another station I fix a puncture for the second time… twice, in the process damage a tiny metal component in my from brake, luckily I carry a spare and replace the pads while I’m at it. Finally, mechanical time wasting complete I turn to see a huge cloud of rain and sand bearing down on us, the wind lashing dust in eyes and crisp packets across the forecourt. The staff invite me inside so I help bring in cafÃ© furniture and baton down for the storm. While we sit it out they share coffee and their dinner of chili rice, tomatoes and melon with me as we chat a little. The youngest helps me make my language notes which I keep on a scrap of paper next to my map on the handlebars, a fun little habit I’ve started since Albania.

A rider whips past outside on the storms locomotive tail wind, I jump on the bike rushing to thank my hospitable hosts and take chase down the road. He heads for the motorway so I keep chasing, Gareth Bains gives me a confused look through red eyes then slowly a drunk looking smile appears, he thinks I’m a hallucination. He’s on the last leg of his Trans Continental race in 8th place with only an hours sleep a night for the last three days, soddenÂ from the storm but seems happy for a little company, we chat for a bit flying along the spacious hard shoulder. His warm Bristol accent is strangely homely after my months of various travel tongues.

My patch blow off the front tube again, as I slow I wish him the best as he races off, the heat and TopPeak patched are really kicking my sanity.

I laugh to myself, sitting in a concrete ditch behind the barrier as trucks blast past eating my birthday cake waiting for the glue to set, it’s a special kind of moment. The second fix holds and I’m off again.

In a station up the road I come across the Bristol whippet, he’s downed two kebabs while I was sitting in the dust and is about to head back out. It’s nine at night and I’m pondering a spot to sleep when he asks if I want to ride through the night to Istanbul – roughly another 290km, I can’t help but smile; Fuck it, go on then. Therese also a sense I don’t want to be the last person he talked to before falling asleep on his tri-bars and weavingÂ under a truck.

We raid the shop for calories, double-check our lights and hit the big road east, it’s smooth, quiet and there may even be a generous tailwind, miles fly past as we ride side by side.

One of the few bits of routing set by the race is an approach from the north past an arboretum into Istanbul to avoid the famously dangerous traffic, so at about 2am we peel off north onto empty main roads cutting through endless forests, our only company the odd ancient behemoth truckÂ stacked high and wide with hay bales.

Dog regularly take chase to keep us on our toes, leaping from the shadows, leaving me – the slower of the two, to give the odd kick when they get too close. The night out is silent, rarely a soul passes us, until you stop; that is when the dogs sense your presence and start sounding the alarm. It gives you constant feeling of unwelcome, motivation to keep moving, even if it was just to check the map.

It’s about 3:30am and the pace has dropped, the racing machine needs a power nap so we coastÂ for another half hour before finding a suitable place to get 20 minutes sleep. Near a village a drinking fountain ledge and fruits stall table byÂ the side of the road look perfect accommodation, flat surfaces; which is all we require.

As usual the dogs drum up as we lay down, doing their duty to alert the neighborhood of its mystery guests. About fifty meters away across the field a torch starts to restlessly scan the scene, flicking back and forth, it’s insomniac bearer not quite sure what to look for, though never settling on us. We sleep for the twenty minutes but I keep one eye on the unusually persistent beam till times up and we rise to mount the bikes.

Without warning a rifle shot cracks out, the round rips through foliage feet from us and the dogs stop barking. We stare in confusion at each other while our sleepÂ deprivedÂ addled brains try to comprehend.

I shout out all the Turkish words I know “Marhaba! Selamun Aleykum! bisiklet!” and turn on my lights, they still don’t know what they are shooting at so might as well give them a choice.

We must ride past them to proceed so nervously we creep up the road, loud and bright within ten meters of the hut, the torch beams multiplying and fixing upon us. Nothing is said as we pass and disappear into the night the two of us exchange baffled mutterings of disbelief while repeating what’s become the mantra of the ride “still not dead yet“.

The next one hundred kilometers are far less stressful, just the odd pack of snarling dogs. The little nap worked wonders, we are wired on gun shot adrenaline, and cheap sweets. The sun slowly rises thick and golden, revealing rural Turkey and waking the traffic. Hill after hill we near the big city, suddenly we are at a junction with the Bospherous on the other side, Gareth (who is racing for his second year) turns to me with a grin “congratulations, you’ve just ridden to Asia”, I’ve been so absorbed with his ride I’ve forgotten my own.

We arrange to meet later and he ride on to cross one of the most demanding finish lines in the world, realising his wildest dream of a top ten finish in the Transcontinental.
Sat on the quayside I stare across the Bospherous half giggling, half emotional tears, all baffled and a little sleepless. A much needed swim in the waters refreshes the spirits and washed off the thick layer of miles.
Rolling along the waterfront traffic with a beer in hand I meet the rest of the race gang and help the few that have survived celebrate, we have just ridden across Europe, though I took my time about it.

Turkey is struggling to contain a lot of tension at this point, a member of the army I talked to weeks later spoke of the adopted “shoot first, ask questions later” mind that had become the norm since the start of the war to its eastern border.

Looking back now, we were incredibly lucky, nothing more, nothing less.

Note: I did not support Gareth in his ride and respected the race rules, with myself riding a laden bike he was always faster and I thank him for letting me follow him on his ineradicable achievement. 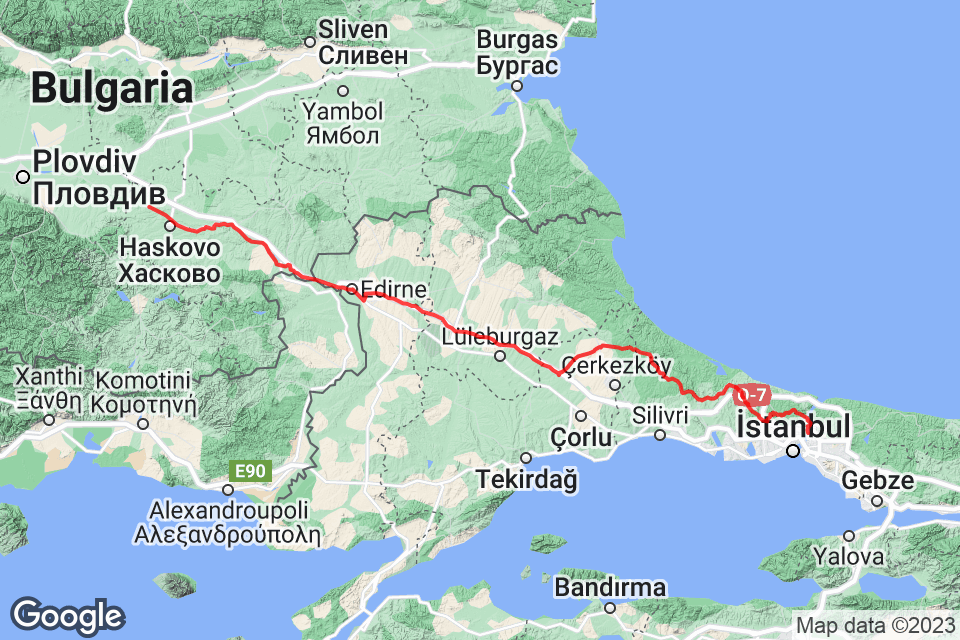